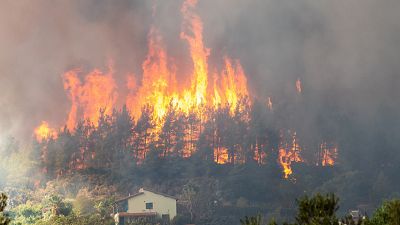 The media labelled it a wake-up call for climate action. Last month, the latest report from the Intergovernmental Panel on Climate Change (IPCC) was possibly science’s strongest warning about the effects of climate change that will affect most regions on our planet. It seemed almost fateful. The IPCC Sixth Assessment Report, Working Group One (WGI) which focuses on the physical changes in our climate, came out after months of extreme events battered the globe from China to North America, and when the memory of Europe’s overwhelming floods was still fresh.

“What is most striking is that we are seeing climate change unfolding in all regions of the planet,” says Dr. Robert Vautard, climate scientist and director of the Pierre-Simon Laplace Institute “We can now see it in full screen, and that gives more confidence to climate projections,” says Dr. Vautard, who adds that thirty years after the first IPCC report came out, the latest update is also the boldest. “It goes way beyond global-level projections. It gives an idea of the fate of all the major impact drivers that will occur in the coming decades, from climate extremes to snow cover, to coastal floods. It’s exhaustive and it’s designed to be useful. And more importantly, it’s much more precise.”

The IPCC’s take on extreme weather

For the first time in its physical assessment reports, the IPCC dedicated a chapter to weather and climate extremes in a changing climate, looking at the link between increasing global temperatures and the likeliness of us experiencing more violent weather patterns and events. The probability has increased, warns the report with greater certainty than in earlier reports. Every extra 0.5°C of warming will trigger noticeable changes in hot extremes, heavy precipitation and drought, tropical cyclones, and marine heatwaves, which could occur more often, and hit more intensely in many regions.

Hot extremes are already more intense over most of the planet’s land surface, while marine heatwaves have been twice as frequent since the 1980s. The last four decades have also seen higher precipitation associated with storms and storm routes shifting from the mid-latitudes towards the poles in both hemispheres. More intense tropical cyclones have also become more common, while typhoons in the western North Pacific have been forming further north than they used to.

“In 2012, there was a special report on extreme events, but science has advanced a lot since,” says Dr. Rasmus Benestad, climate scientist at the Norwegian Meteorological Institute. “According to the 2021 report, we can now say with more certainty that the extremes we see are connected to global warming and increasing greenhouse gases in the atmosphere.”

Predicting future events for a 2°C warmer world can be done with a higher degree of confidence than for 1.5°C, says the report. Under several degrees of warming, experts estimate that wet weather will get wetter, leading to increased flooding across many regions of Europe, North America, and the Pacific. On average, precipitation will increase throughout the polar regions, most of Asia, northern Europe and North America, while more severe droughts will hit more often regions in Africa, South America and southern Europe, IPCC experts say.

But the IPCC also warns about the unprecedented happening more frequently, events that have not been recorded before, with a higher probability even in a world warmer by 1.5°C.

Dr. Francisco Doblas Reyes, who leads the Earth Sciences Department at the Barcelona Supercomputing Centre and has been involved in the preparation of the IPCC report, says that it was the report’s new wording that captured the world’s attention. “People have become very interested in words like “unprecedented” related to climate changes that have not been seen in the past millennia. Previous reports have warned already about the occurrence of the events that we see now, and we are now predicting or at least providing information on what is likely to happen in the next 20 years and beyond,” says Dr. Doblas Reyes.

Extremes hitting hard for most of 2021

As the IPCC published its report, its warnings on the increased frequency of extreme events came in the aftermath of an extreme summer. And beyond the report, scientists across the world are still searching for explanations for these events and whether human activities had any say in producing them. Dr. Doblas Reyes says that British Colombia’s extreme heat event this July was particularly important. “On one side it had a big impact on society and the economy; on the other, it was unprecedented and unforeseen – this tells us that beyond what we are warning, there are events that are unimaginable. We are talking of temperatures close to 50°C that the models didn’t even simulate.”

“Events this summer broke the records by far,” says Dr. Vautard. The case of the British Colombia heatwave was one, happening every 1,000 years. “We saw a clear heating trend, but we could not guess such a jump; it’s still possible that this happened by chance, but at the same time it’s really intriguing to see one in 1,000 years events. Our study [besides the IPCC report] shows that without climate change, this would have been even more exceptional and almost completely impossible,” says Dr. Vautard.

Heat records were broken beyond Canada and in Siberia, they contributed to the region’s biggest ever wildfires. Europe also broke its heat record, as the island of Sicily recorded 48.4°C this August. “If we look at regional extremes such as heavy precipitation, it’s much clearer now than ten years ago that we have signals in many regions – in Asia, Northern Europe, North America and others,” says Dr. Vautard. “We have an increase in heatwaves and heat extremes, and a decrease in cold extremes.”

This summer, beyond heatwaves, another type of event captured headlines. The magnitude of river floods in Germany, Belgium and the Netherlands stunned authorities with their human toll and extensive damages, while heavy rainfall caused flash flooding in London and mudslides in Turkey. For Europe, Dr. Benestad thinks that the continent will feel the most the changes in precipitation patterns.

“There is an increasing demand for understanding what we see,” says Dr. Vautard. “Every day or week we hear that something is going wrong, so it’s really important to disentangle whether climate change has contributed to these events. That’s where science comes in and looks at data, models, and facts.”

“Global Climate Models (GCMs) have improved, and now there is a new generation of regional models that can provide predictions at finer detail,” says Dr. Vautard. “Observations have also improved – we have many more datasets, and we know more about whether datasets can be used to estimate long-term trends or not, since we cannot directly interpret the changes that we see.” In the case of European floods this summer, which happened to a limited area, Dr. Vautard says that they need to be understood at a larger scale.

“These high impact events might be happening at a faster pace than we can adapt to them,” says Dr. Doblas Reyes. “We need tools to get information about the unforeseeable events we haven’t looked at yet. We need better models that can answer the questions that society is asking right now.” But our ability to answer to future extreme events depends on society accessing and knowing how to use climate data. Climate services, which Doblas Reyes defines as a branch of climate science that is much closer to society, play a key role in bridging the gaps between scientists and policymakers, between the data available and mitigation and adaptation plans.

Understanding extreme events in a changing climate is part of the work of the Copernicus Climate Change Service (C3S). “Climate data is essential to understand existing and future risk to both extreme events and climate change impacts,” says Dr. Samantha Burgess, deputy director of C3S. “C3S provides the same data that went into the climate projections in the IPCC report so if there is a policy maker or business who is interested in how climate change will impact them either now or in the future they can directly approach us. We also have a very helpful support service to help individual users and significant experience of developing different sectoral applications understanding the links between future climate change and health, energy, insurance, agriculture etc,” explains Dr. Burgess.

C3S data can be used to assess how extreme river floods will behave in the future. The department develops examples of a service which can help improve flood warning strategies, as well as spatial planning and investments in flood control structures. These data support a catalogue of high impact weather events, public data on damages and losses, predictions on extreme rainfall and simulations as well as vulnerability models that can help authorities and engineers plan and protect infrastructure against extremes. “To better prepare for future extreme events, businesses and society need to understand their existing risk and exposure to different types of weather and climate events,” says Dr. Burgess. “Once there is a strong understanding of existing risk, adaptation and mitigation actions can be taken to increase resilience to the risk of future extreme events.”

The experts agree more investment in climate models and services is needed if we want more precise predictions about the future at specific locations. “We have good results now, but it’s not sufficient to provide the answers that we’re seeking, especially for extremes,” says Dr. Benestad, who says science and policy needs to be better connected. “If policymakers and scientists talk more, it would bring great benefits, as the former might not know what we can provide and how to use it in the right way.” Dr. Doblas Reyes also agrees that scientists need to come more to the front. “They have to be ready to provide information about not just what we know from climate research, but also about what we still don’t know and need to pay attention to.”