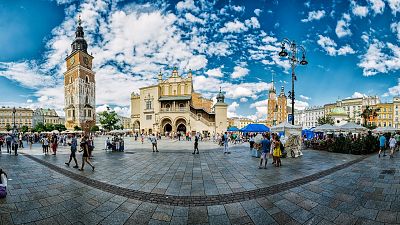 The Polish city of Krakow dates back to the 7th century. It is steeped in history and there are many places in this ancient city that have remained unchanged for centuries.

However, there are also spots that have shifted a lot in recent years. Signs of these changes are becoming more and more visible, such as the abundance of cars on the roads for example.

Lukasz Franek, director of the Public Transport Board in Krakow, says there are now 700 cars per 1,000 inhabitants - and the city was not built for this many cars.

"We just don't fit in with these cars. Our streets in the historic part of the town are not as wide as in Warsaw, Wrocław and Poznań," he explains.

With almost 1 million inhabitants, the city now has a problem with air quality and pollution is being fought on all fronts.

Krakow now has a deliberate policy in place to push private cars out of the centre and some streets are only open to residents, cyclists and scooters.

The city has one of Poland's largest footbridges for pedestrians and cyclists too.

It has also launched an electric public bicycle system as part of the EU's Low-Carb project.

We caught up with one of the city's residents, Marek Rybarczyk, who is a regular user of the public system.

He says he's happy with the price as "they're free!". But more seriously, he thinks the bikes are located in convenient places and loves the fact that they're electric.

Who are the opponents?

Changes to Krakow's traffic system have been met with some opposition.

Those against it hail from mainly designated Clean Transport Zones and tend to be entrepreneurs. In these areas, deliveries of goods to restaurants and shops are allowed only at certain hours and clients are not allowed to drive there at all. So entrepreneurs say this has a direct impact on their income.

Izabela Bobula is an entrepreneur from the Kazimierz district, where these restrictions are in place.

"When people buy a lot of things, they prefer to drive somewhere by car where they can buy everything in one place and they do not have to carry their purchases in bags or in trolleys," she explains.

The authorities in Krakow admit that they are aware of this and although they do not intend to change the path towards cleaner air, they say they will take further steps after consultations with residents.

These consultations are expected to take place towards the end of the year or the beginning of next year. According to Andrzej Kulig, the deputy mayor of Krakow, "discussing urban mobility issues is crucial" to the mayor.

He says that they don't want to do anything top-down because they want to work together with the locals.

When is the time for talks?

The COVID-19 pandemic has meant environmental talks have been put on the backfoot for a while.

But with many residents working remotely and fewer cars on the streets, the air quality in Krakow showed an immediate and significant improvement.

In some districts, Krakow even wants to implement a 15-minute city model.

The goal of this is initiative is to have everything people need within a 15-minute walk or cycle. For this, the authorities would need the green light from the city's inhabitants.