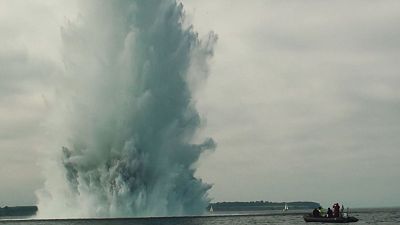 The coastal waters of Germany and other European countries are scattered with old munitions.   -   Copyright  Euronews
By Euronews  •  Updated: 07/08/2021

An EU-backed team of scientists is on a thrill-seeking mission: to find all the unexploded bombs from WW1 and WW2 off the coast of Germany and other European countries.

Bombs lying on Europe’s seafloor are a big issue. Oliver Kinast, head of the Schleswig-Holstein bomb disposal unit, explains that the North Sea and the Baltic hide around 1.6 million tonnes of munition from the World Wars.

Although it is unusual for these old munitions to explode, it is possible for them to detonate if they are hit by an anchor, for instance.

This not only endangers marine species but also pollutes European waters. Aaron Beck, a researcher involved in the project, explains that the chemicals inside the bombs will soon start to leak out because the metal casings have been corroding for 70-80 years.

However, thanks to new technologies, finding decaying weapons in the ocean is becoming easier.