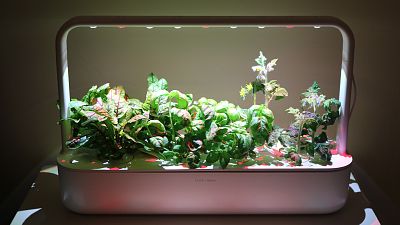 Ever since we entered the lockdown stage of the coronavirus crisis, many of us have been struggling with staying indoors for long periods of time. Without a garden or even a small balcony, it’s natural (or far from natural) to feel starved of greenery and the first glimpses of Spring.

Nature is especially limited in urban areas like cities, so one allotted walk per day is often not enough to lift our mood. With social distancing enforced nationwide, gone are the days of soaking up the rays with a glass of rosé in hand and friends by our side.

Alongside meditation and practising mindfulness at home, studies have shown that growing plants can have a positive impact on mental wellbeing.

A survey by sustainable members’ club Arboretum asked 2,000 people if being exposed to plants affected their mental health. 42 per cent reported that it was improved. In London, the percentage was even higher, with 56 per cent admitting that being amongst greenery positively enhanced their mood. With many of us working from home and surrounded by technology, studies suggest that plants can reduce stress and anxiety - proof that your potted succulent isn’t just a pretty home decoration.

Dr. Jonathan S. Caplan from Psychology Today describes further benefits of having plants indoors, mentioning improved attentiveness and reaction times, raised productivity and raised job satisfaction. Alongside these findings, basic biology tells us that indoor plants increase the levels of clean oxygen in the air. Greenery has also been proven to help people heal during hospital visits and even lower blood pressure. So there’s even more of a reason to carry on buying those get-well soon flowers. The Royal Horticultural society also notes that indoor gardens can increase pain tolerance and even reduce fatigue and headaches. All welcomed advantages during the current pandemic.

We spoke to environmental psychologist Dr. Sally Augustin, who explained that “nature can have a positive impact on people's mental well-being during quarantine, by reducing stress levels and cognitively refreshing people.” She continued, this can be “regardless of whether people are in nature, looking at it in paintings, photographs or other art, or even hearing it - think peaceful meadow sounds.” So we might choose to change our laptop backgrounds to a scenic view of rolling fields, or open our windows to bird song - or we could just grow an indoor garden ourselves.

I tried my hand at an indoor garden

I decided to experiment with the Click & Grow Smart Garden 9 to see if anything would grow in a small city-centre flat. Aesthetically, the smart garden is modern, sleek and compact. The simple design fits nicely into any kitchen or living area and when the plants start to grow it’s kind of a big deal. Supposedly none of the Click & Grow models have a noticeable effect on your electricity bill and there’s barely any upkeep. Fortunately for me, you don’t need to be an experienced gardener to own one either.

The technology, which took 10 years to perfect, is made from natural and renewable materials so that plants contain neither pesticides nor hormones. Founder, Mattias Lepp, used NASA’s findings on plant development in space to patent the nano-tech growth medium. Fitted with an LED light, the garden can grow all year round in any home, regardless of light and space.

Before I received my smart garden, I was sent an email with a designated support manager, named Joonas, to help me along. With a personal green-fingered specialist and a community of growers behind me, I felt more confident. It also only took 10 minutes to set up from the moment it arrived on my doorstep, which was quite a re-leaf.

The Click & Grow was easy to assemble and had few components to worry about. The LED light, which accelerates the rate of growth, was secured to the main base by slotting in two extended arms. It also has a built-in timer so you don’t have to fret about switching it on and off. The plant pods can be placed into the provided reusable plastic cups and germination domes click into place, like tiny greenhouses, to speed up the process of growing. Then the reservoir of water in the base is filled up to four litres and, once the pods are all settled into their cubbyholes, you just plug it in and leave for three to four weeks.

I went for vegetation that I would usually throw into a salad, basil and baby tomatoes, with the addition of bloody sorrel (which admittedly I chose for aesthetic purposes). This seemed like a good test of whether the pods varied in efficiency, but spoiler alert - each pod grew identically to its respective plant type. The company’s “sprouting guarantee” also ensures that if your plant doesn’t sprout it will be replaced.

In the manual, it says it may take up to three weeks to see the first signs of sprouting, so I was pleasantly surprised when the bloody sorrel and basil seemed to be growing after five days. By the end of month, I had enough growth to start cutting the basil and sorrel in order to use it. As a result, I could stop buying basil pots from the supermarket, which felt satisfying.

I kept reminding myself, even being self-sufficient in the smallest of ways is important as it reduces my carbon footprint, both by cutting out the transportation of goods to the supermarket and the overzealous plastic wrapping they come in.

While the LED light is quite bright and can take some getting used to on the Click & Grow garden, it reaped the results so it was worth it. Plant pods are also on the expensive side, but as a first step to growing plants indoors, it’s a convenient, low maintenance way to begin.

Since I first embarked on my indoor garden, the yield has been decent in the 9-pod model, though I can’t vouch for the 3-pod. The variety of herbs and flowers to buy from was vast, from kale, lettuce, rosemary and peppers and more exotic chilies and pak choi, to an array of colourful plants, petunias, lavender and pansies. I first started in December and saw no sign of tomatoes, but as soon as we hit late March they appeared - a pleasant surprise in isolation. Even now, my basil is still going strong, it really is the gift that keeps on giving.