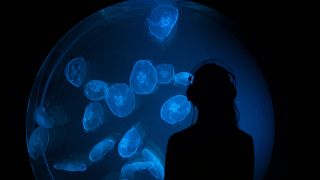 A globe spinning in a glass case is slowly enveloped by an ominous fluorescent green cloud which wraps itself into an atmospheric layer. As the earth becomes covered in the gas the intention of Paris based artist due, HeHe, materialises; a visualisation of atmospheric change that does not easily define human and non-human input. Shielded by blinds recycled from previous events and setting the tone for the rest of the exhibition, Domestic catastrophe No. 3: La Planète Laboratoire leads you to quite literally enact the title of “Eco-Visionaries: Confronting a planet in the state of emergency”.

On the 23rd of November, the exhibition opens at The Royal Academy of Arts in London with its curators hoping that art and architecture can break through the dense facts and figures dominating media coverage of the climate crisis. Using research from environmental experts as inspiration, 21 practitioners from a wide range of media including architecture, film, and immersive installation have created works in an attempt to respond to and challenge coverage of the crisis.

Practical visualisations of pollution and forward-looking imaginings of vaguely dystopian futures are displayed alongside more hopeful concepts of adaptation that exhibition co-curator Mariana Pestana explains explore what technology can do to replace the things we have lost. As engagement with climate change becomes more widespread, the RA wants to continue the tradition that started it over 200 years ago and supply artists responses to contemporary crises.

Technology can’t always provide the solution, however, as Unknown Fields highlight with their specially commissioned work, The Breast Milk of the Volcano. The short film tells an Aymara legend about how the salt flat below the Tunupa volcano is formed from her tears and breast milk after her baby was taken away. Beneath the Bolivian salt flats is the world’s largest lithium deposit, an element essential for our ongoing obsession with battery-powered devices.

In the second of the three rooms, a whole wall is dedicated to one of the exhibition's highlights, Alexandra Daisy Ginsberg’s AI reconstruction of the near-extinct northern white rhino. Using important research footage featuring the behaviours and sounds of the last herd, Ginsberg used work from Deepmind lab to have The Substitute learn from its environment. Slowly materialising into a distinct reminder of species that has been effectively lost thanks to human action, the artist wants to challenge the “techno-utopian idea that we can bring extinct animals back to life”.

Not all of the works were created especially for Eco-Visionaries; there is a bronze cast version of Virgil Abloh’s IKEA collaboration work Alaska Chair, as well as another chance to see Olafur Eliasson’s The Ice Melting series. One of the architectural models is a work inspired by the early environmental concepts of 1970s avant-garde architecture firm Ant Farm. In collaboration with WORKac, 3.C. City: Climate, Convention, Cruise imagines an island vessel shingled with solar panels and designed to facilitate interactions between species.

Read More | Is this the best art exhibition for a date in London right now?

An interactive immersive experience created by Rimini Protokoll is possibly the most ambitious of the pieces. A tank filled with 50 live jellyfish is the visual backbone of the work as marine biologists narrate a tale of the rising tide of these marine creatures. Jellyfish are one of the rare species that benefit from increasing sea temperatures and declining biodiversity. Warmer seas extend their breeding period and damage done to populations of things like sea turtles by plastic pollution reduce the number of predators there are to eat them. “Warm water is a disaster for anything that breathes, and a dream come true for anything that doesn’t breathe much, like a jellyfish,” explains the recording.

If you are into innovative concepts designed to counteract climate change then Eco-Visionaries is well worth a look. Striking a balance between accessible communication and the integration of scientific findings it showcases past problems and future issues. Although its clear target audience is those who struggle to decipher news reports about rising sea levels with incomprehensible air pollution figures, it is difficult to imagine that there are many interested individuals who aren’t informed of the basics of the climate crisis by now.

"Eco-Visionaries: Confronting a planet in a state of emergency" will be at The Royal Academy from the 23rd November 2019 to 23 February 2020.

Tickets are £12 and can be bought via the RA website here.