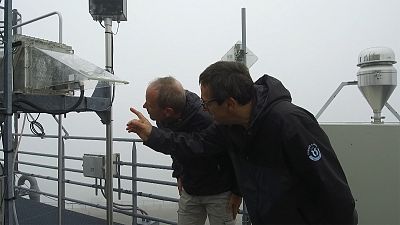 We investigate one of the hottest topics in climate change in this episode of Climate Now, looking at how scientists are working to track emissions and differentiate between sources of CO2, be they human or natural.

We begin with a quick review of the latest climate data from Copernicus. It has been a year of records so far, and October 2018 was - by a small margin - the warmest October on record, with global temperatures an average of 1.3 degrees Centigrade above the pre-industrial average.

It was warmer, and it was also wetter. Across southern Ireland, the UK, France, Benelux, Germany, the Baltics, up into Russia there was higher rainfall than the 1981-2010 average.

That wasn't the case across the Mediterranean region, nor in the Black Sea area and eastern Europe, where there was lower than average rainfall.

The warming trend that we have been reporting is due to rising CO2 levels in the atmosphere, trapping more heat. It's known as the greenhouse effect.

If you look at graphs of CO2 levels a clear rise is visible as mankind's industrial activities pump gas into the atmosphere. The other clear trend is that CO2 levels rise and fall every year, according to the seasons. The levels are higher in late winter and early spring, and then decrease as plants and trees suck up the gas as they grow.

It raises the question of how carbon dioxide levels are currently measured, and whether we can we tell the difference between CO2 from plants and trees, and CO2 made by man.

Up at the Observatory of the Puy de Dome

That topic is a focus of research for Michel Ramonet, a scientist at from the French research organisation CNRS and the Laboratoire des Sciences du Climat et de l'Environnement, and we met him at the Observatory of the Puy de Dome, in the Auvergne-Rhône-Alpes region of France.

The observatory measures CO2 and other atmospheric components every second of the day, sending the information about greenhouse gases to the Copernicus Climate Change Service every 24 hours.

The rise in CO2 has spiked considerably in recent decades. When Ramonet began his career in the late 1980s his first measurements of CO2 had values around 300 parts per million.

Natural cycles of growth and decay can lead to the level of CO2 rising or falling by 15 to 20 parts per million.

Half of emissions absorbed by nature

Humans are responsible for the CO2 rise, emitting over 36 gigatonnes of CO2 last year. However, humanity is 'living on credit' from nature for the moment, with half of those emissions currently being absorbed by nature - with 30% going into plants and trees, and 20% going into the oceans.

For now, nature keeps pace with humanity, capturing half of our emissions. "That's the good news," says Ramonet. "The bad news is that living on credit for a long time is risky, so we do not know if these natural wells, so-called carbon sinks, will last forever. "

Carbon dioxide mixes quickly into the atmosphere, so it's a huge challenge to know which emissions come from where.

"We measure the total concentration level of CO2, and we'd love to be able to give this CO2 a colour, to have green CO2 for vegetation and black for when it comes from cars, but we don't have an easy tool to do that," he says.

The scientists believe they have an answer, using other gases like nitrogen oxide and certain carbon isotopes to link CO2 in the atmosphere to human activity.  It's cutting edge science, and expensive, meaning it hasn't been widely rolled out.

The scientists are also determined to gather more data. They are working to have more CO2 monitoring stations around cities as well as at atmospheric observatories, and to deploy a new European satellite to measure remote areas from space.

Ramonet explains: "There are areas of the world where there are almost no measurements - in Africa, the Amazon, Siberia - and these are key regions for understanding the global carbon cycle and interactions with the ecosystems on land in particular, be it the Amazonian forest, or the tropical forest in Africa. So we're desperately lacking in situ measurements."

Those measurements matter for several reasons. For example, Ramonet's research shows that during the 2018 heatwave in Europe last year the amount of carbon dioxide absorbed by nature decreased because the plants became more stressed and less active. Land use changes such as deforestation and reforestation can also change a country's carbon budget.

There's intense interest in being able to better understand where emissions come from, where carbon sinks are to be found, and who is polluting the most. Such evidence is used by countries to judge how effective their emissions reduction policies really are.

However, Ramonet stresses that we should not be too optimistic about the effect of carbon dioxide reduction schemes in the short term, simply because of the relatively slow reaction of nature to any change.

"The actions that can and should be taken now are aimed at reducing the acceleration of CO2 levels for future generations. Today's actions will have an effect in only 30, 50 years. Hence the difficulty to motivate society to take them today," he says.

Warmest October on record occurred in 2019