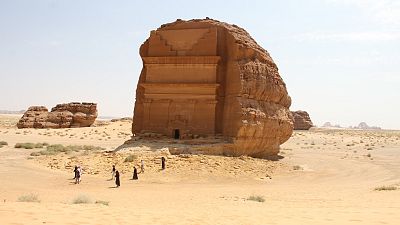 As I walked through Riyadh airport, fighting to extract an abaya – a long black robe customarily worn by women in Saudi Arabia as a symbol of modesty - from my hand luggage, Saudi Arabia gave me my first shock.

“You don’t need it anymore,” my driver told me. Everyone else was wearing one, so I ignored him and shrugged it on, trying not to trip on the overlong fabric. As we walked into the 33 C heat still lingering at 10pm, he told me that as of a few weeks ago, women in Saudi Arabia were no longer obliged to don the abaya when out in public.

I was there for the launch of Saudi Arabia’s new tourist visa, and assumed this new policy was a shift in policy in tandem with the country opening its doors to tourism. That turned out to be true. In the official announcement, Saudi Arabia’s tourism board states that both sexes are required to dress modestly in public, with women covering their shoulders and knees, but made no mention of the abaya. It’s worth noting that this advice is yet to make its way onto the official advice page for British travelers to Saudi.

So naturally, I wanted to put this to the test on my visits to Riyadh, AlUla, Tabuk and Jeddah. Each present their own challenges and rewards, but are also very culturally diverse. Jeddah and Riyadh are both metropolises, but Jeddah has the more laid back vibe of a beach town, in comparison to the bustle of capital city Riyadh.

With this in mind, I wandered into Jeddah’s historical markets, without a male guide (you don’t need one) with my abaya open to reveal loose trousers and blouse underneath. Even so, I attracted attention, intrigue, a veritable horde of gawpers and some comments.

That’s not to say there hasn’t been progress, nor that this will remain the situation for long. Speaking to regular visitors to Saudi, the landscape for women is vastly different to even that of three years ago. Leaving my head uncovered went unnoticed by many, and women are very much on the road. But women, including visitors, must be prepared for a raw deal.

In two of the hotels I stayed in, women were barred from using the pool in favour of men. And in the Ritz Carlton, Jeddah, women were permitted to use the 24-hour fitness centre between the hours of 5am and 7am. Some I encountered were apologetic when informing me of this. For others, it was simply fact.

However, you may encounter the odd gem with segregated facilities, such as Riyadh’s Al Faisaliah, which has a four storey gym featuring health club, pool, treatment room, hair salon, steam rooms, saunas and cardio and conditioning rooms solely for female visitors.Also gems are the Saudi people, who are unfailingly welcoming despite vast language and culture barriers. Wandering through markets, I was something of a curiosity but handed token gifts by stallholders wanting to extend a hand to foreigners.

Meanwhile, although appreciated, tipping is not expected by waiting staff, bellboys or drivers. And I do advise investing in having a driver take you around because the roads are probably best navigated by those familiar with them.

Google Maps is not necessarily to be relied upon. On the road to Tabuk from AlUla, we took a turn off the road and went cross-country across the desert for a few miles, cutting more than 90 minutes from what could have been a 4.5 hour journey time. Equally, we rejoined the road, only for it to end again a few miles later, forcing us into another rather bumpy ride across the sand until it restarted.

Eating in Saudi is easy, with all dietary requirements usually catered for in large hotels and restaurants. However, there is a culture of massively over-ordering food and overfeeding guests so adjustable waistbands are advised.

Rural AlUla is home of one of Saudi Arabia’s most spectacular UNESCO World Heritage Sites (it has five in total). The tombs at Hegra are a remnant of the ancient Nabatean civilisation, which predated the Roman Empire.

The tombs are cut into rock that formed coral reefs when the region was underwater millions of years ago. Now, they’re a sight to rival that of their northern neighbour Petra, with significantly higher security and fewer tourists in a bid to protect the historic site.

While in AlUla, there is also an opportunity to visit its old town, where the community lived in close proximity, as well as the infinitely Instagrammable Elephant Rock, so called because of its uneven archway, resembling an elephant’s trunk.

Natural wonders are plentiful, with the quiet region allowing for stunning stargazing, with views of the Milky Way uninterrupted by light pollution.

By comparison, cosmopolitan Jeddah is always lit up. It is a hub of modern and ancient culture. The gateway to Mecca, its street markets stock everything from hair care products to rolls of fabric, just a few miles from modernist skyscrapers. Venture an hour up the coast, and you’ll arrive at the King Abdullah Economic Centre, a hub for entertainment, research and luxury.

Out on a yacht, you can reach a host of diving and snorkelling hotspots in under half an hour. So clear is the water, and so shallow the reefs that snorkelling alone provides a vantage point unmatched by any aquarium.Meanwhile, Tabuk is also home to stunning scuba spots in the slightly cooler waters of the north. But for culture pilgrims, there is an opportunity to visit the Valley of Moses, where it is believed the biblical Moses led the people fleeing Egypt.

Saudi Arabia has a long way to go, for sure. But it is developing at a staggering pace and I, for one, would return to discover the finished product.