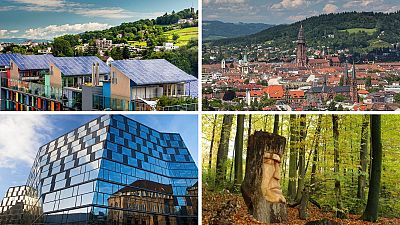 Nestled in the far south west corner of Germany, surrounded by the beautiful hills of the Black Forest and with a microclimate that keeps everything mild, historic Freiburg is a German gem. It also happens to be one of the world's most forward-looking, innovative and green cities.

A long history of technological innovation coupled with a thriving university and an anti-establishment ethos which cottoned on to the importance of ecology and the benefits of living in a green way long before the mainstream (these ideas were floating in Freiburg back in the 1970s when they were considered wacky and even dangerous), has created a city which attracts experts from around the world who want to see what a green city looks like and how they can create their own version.

Related | Is Downtown Doha the most sustainable city district in the world?

One of Freiburg's foremost eco experts is Hans-Jörg Schwander who works for the city's Innovation Academy and hosts international delegations in the city. Here he tells Euronews living why we should learn from Freiburg.

Tell us about how Innovation Academy helps Freiburg to be an 'innovative' and 'green' city?

“We want to present people with the best practice, the work people do in Freiburg – to say that a better world is possible everywhere. Our clients are 7268 visitors from about 40 countries around the world. We are five employees and 10 freelancers.”

Why do you do this work?

“We like to work on themes like sustainability and climate protection. They are so important. Therefore we are also collaborating with the GreenCity Freiburg (an organisation which promotes Freiburg's eco city ideas)”

What innovations do you pioneer?

You work with a lot of education groups?

“Education in particular, yes. Here are the actual figures from 2018: we ran rallies for schools (195 groups), seminars for universities (56 groups), guided tours (94 expert delegations), moderated workshops for municipalities (10 delegations), lectures in Europe (in Drammen, Amsterdam) and three week seminars for American students about sustainable urban design and the green city of Freiburg. Our long term projects include one called Blooming Industrial Areas (BIG) with financial help from the state of Baden-Wurttemberg, city of Freiburg, foundations and sponsors. We have a long term project called Meeting Point Vauban with financial help from the state and sponsors.”

Is Freiburg the greenest city in the world?

Related | A smart bench that runs on green energy

What is it like to live in the green city of Freiburg?

“There's the atmosphere of a medieval city, you can savour life, there's reduced traffic, a big pedestrian zone, then there's the wine region, better weather(!), the nice landscape around the city with the Black Forest, Kaiserstuhl, Alsace, and not far away from Switzerland and France too.”

Can Freiburg do even more to be even greener?

“Yes of course, some examples for you: reducing motorized car traffic even more and taking the bike or the public transport/tramway more. Reducing the consumption of meat, clothes, appliances, etc. Reducing grey energy: no own washing machine, own freezer, own car, own dryer. It's better to share the appliances in multi family homes, for example in the basements. Developing another awareness, another goal for a life without working for unimportant things and appliances. Learning at school to grow vegetables and to prepare wonderful meals. Increasing the rate of modernization of old buildings. To construct more windmills and solar panels on the roof. To ban plastic bags. To avoid hot spots and adapt the districts for the impacts of the climate change.”