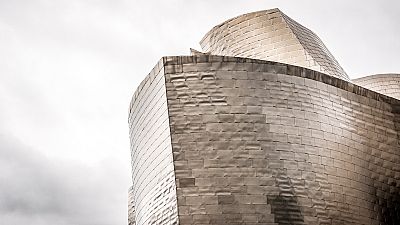 Spain has developed a rich and dynamic contemporary art scene in the last decades, with artists from around the world exhibiting in many of its iconic museums. As summer gives way to autumn, and outdoor relaxing in the sun turns to a quest for indoor cultural activities, art centres across the country have come up with an exciting and diverse program. Follow our guide for some of the best modern art exhibitions you can see while on a long weekend break in Spain.

Portuguese artist Joana Vasconcelos is perhaps one of the most famous and well admired woman in the world of contemporary art today. With her exhibition in the iconic Guggenheim Museum, she shows just how influential she is. In the monumental atrium of the museum, her latest sculpture, “Egeria” spreads voluptuously to the high ceiling, almost standing as a metaphor of the artist’s own ascension in the art industry and of the occupation of museums by women artists. I Am Your Mirror, which features thirty of her works, created over the last two decades, brings the visitor directly into her colourful world of carefully created symbolism. Acting as a mirror of society, it forces each one of us to think about current social issues and in particular about one theme that is dear to Vasconcelos’ heart - the role of women in our contemporary world.

"The mask made of mirrors is central to the exhibition. It forces viewers to think about what they are seeing and whether some things are not hidden. The concept of the mask can also be linked to the idea of femininity which my work touches upon, and to the fact the women’s true identities, sexuality and freedoms are often repressed or hidden,” Vasconcelos explains. One of her most famous and controversial piece, “The Bride”, also talks about the concept of multiple identities which is symbolized by the mask. From a distance, it looks like you are facing a beautiful and elaborate chandelier, when from up close, it’s striking to see that it’s made of tampons.

While you can’t help but admire all the technicalities involved in building her large structures, using such a wide range of materials, what matters to Vasconcelos is that the visitor gets a sense of the ideas she is playing with and trying to bring forth. “Scales, techniques, materials - they are always there during the creative process and important, but they are at the service of a conceptual process”, she says. And she does succeed in making the visitor leave the exhibition thinking not just about the way her artworks look, but also about all the roles assigned to individuals - women in particular - in society.

Dorothea Tanning “Behind the Door, another Invisible Door” at Museo Reina Sofia in Madrid (Until 7 January 2019)

This is the first major retrospective dedicated to the American surrealist artist, and it’s a real tribute to her vibrant artistic world, spanning many decades and mediums from painting to sculpture. More than 150 of her works will be exhibited in the Reina Sofia until early next year. Some of them will be seen by the public for the first time. Dorothea Tanning is a key figure of a second wave of surrealism which began in the 1940s. She was introduced to it when she attended a major exhibition at the New York MoMa in 1936. It left a lasting impression on her, leading her to say that in surrealism, she had discovered a “limitless expanse of possibilities”.

From then on, her work took on a clear surrealist direction, and all her pieces are a testimony to this rich artistic movement. “Surrealism is often reduced to a couple of male artists’ names, and this exhibition is a testimony that this artistic movement was so much more than that, and that Dorothea Tanning really represents surrealism too,” says curator Alyce Mahon. Tanning’s autoportrait “Birthday” which greets the visitor at the start of the exhibition, is perhaps one of the most memorable and pertinent to understand the artist, marking the moment of her birth into the world of surrealism.

Tanning was married to Dadaist and surrealist pioneer Max Ernst, but as the exhibition succeeds in showing, it didn’t stop her from being an impressive artist herself, with her own style and a very prolific production of artworks. Some of the most striking paintings explore the idea of space and the boundaries between the private and public spheres. Tanning disrupts the domestic space and turns it into a surrealist landscape, injecting some violence into it to question the identities of family, patriarchy and motherhood. Visitors can also see her iconic installation Chambre 202, Hôtel du Pavot (1970–1973), with amorphous sculptures inviting them to be part of the surreal world she inhabits.

Linking back to the exhibition's title, the motif of the door is very present in all her work to reinforce the artist’s reflexions around the concept frontiers between public and private, and invites the spectator to enter her mysterious and fascinating world, where nothing is quite as it seems. A refreshing exhibition, making the most of the fantastic space to remind visitors that the role of women in surrealism and in contemporary art is often overlooked.

This surprising small exhibition is the first of a larger series looking at post-WW2 catalan art and its connexions with the global artistic movements that arose in the 60s and 70s. In Catalonia, the second half of the 20th century was marked by ideals of renovation, cultural revolution and innovation. It was seen as a new artistic era that could begin to rethink society, and criticize emerging cultural models that were arising in the context of capitalism.

The exhibition invites viewers to see how local artists worked around those issue, in close dialogue with the artistic movements of Pop Art and New Figuration that were appearing in the rest of the world. The difference here was these artists were working in Franco’s Spain. The exhibition retraces artistic trajectories of some of the most influential artists such as American Norman Narotzky who lived in Barcelona and explored social justice issues; and Francesc Artigau o Robert Llimós who used figuration with a clear objective of criticising the politics of the time and the consumer society. Antoni Porta created an artwork relating closely to the psychedelic experience while Antoni Llena took on a more radical path, adopting the principles of Italian movement of Arte Povera (“Poor art”).

These artists all moved between political militancy and hedonistic individualism, between figurative painting and the creation of new immaterial artistic practices. Pacifism, sexual revolution, capitalism, and the unlimited exploration of individual creativity are some of the fundamental challenges that they highlighted in this exhibition. With one big difference: the artworks all take root in the specific context of Catalan identity and resistance to Franco’s regime.