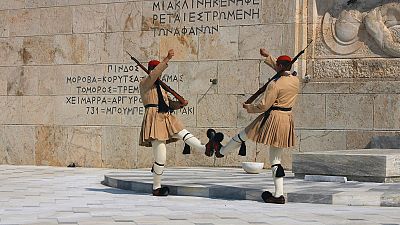 It might be the effect of the short white pleated kilts, tasselled black garters and pompom-tipped shoes, but there's something more endearing than intimidating about Greece's best-known military unit.

Created 150 years ago, the Presidential Guard originally named the Evzones is one of Athens' most popular tourist attractions.

They are mostly known for their uniforms, completed with the pompom-tipped shoes, known as tsarouchia. The origin of their style goes back to the Byzantine times, with some inspiration from neighbouring tribes, including the Turks. They used to be the most common footwear worn by both urban and rural Greeks before the Greek Revolution.

Today these pompom-tipped shoes are handcrafted in a tiny workshop, where a handful of shoemakers hammer nails into the bottom of the shoes and groom the pompoms while making sure the shoes are comfortable enough.

Preserving the tradition is very important for the tailors as well, who say the guard's perfect appearance is everything to them.

The three exclusive uniforms of the unit were inspired by the highland dress worn while Greece was still in thrall to the Ottoman Turkish empire. These clothes take months to make, with most of the effort going into the needlework - a dying art in a country. Tailor Vangelis Lazos says they look to the past to find historical techniques to make the costumes more authentic.

As the symbol of Greek pride and history, the unit is now purely ceremonial in function, their honorary duty includes standing sentry at the Tomb of the Unknown Soldier and hoisting and lowering the Greek flag on the Acropolis.