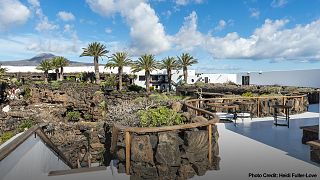 “Low maintenance, low development costs and no roof repairs to worry about.” That’s how Bernard Fitzpatrick describes the cave where he lives near Guadix in Andalucia.

In Spain, cave houses are throwing off their prehistoric reputation and moving firmly into 21st century fashion. Pockets of grottos can be found around the towns of Teruel and Murcia but Iberia’s biggest troglodyte population, however, is concentrated in northern Andalusia, along the hills linking Granada with Jaen, Almeria and Albacete.

From the arid arroyos of Almeria, to the fulvous cliffs of Guadix, here are the top ten spots to buy cave homes in sunny, southern Spain

Connected by direct flights to the UK, the gypsy caves of Sacromonte standing in the shadow of Granada’s mythical Alhambra have been inhabited for thousands of years. Granada properties (www.granadaproperties.com) have several troglodyte dwellings for sale in this region famed for its flamenco zambras (cave concerts). 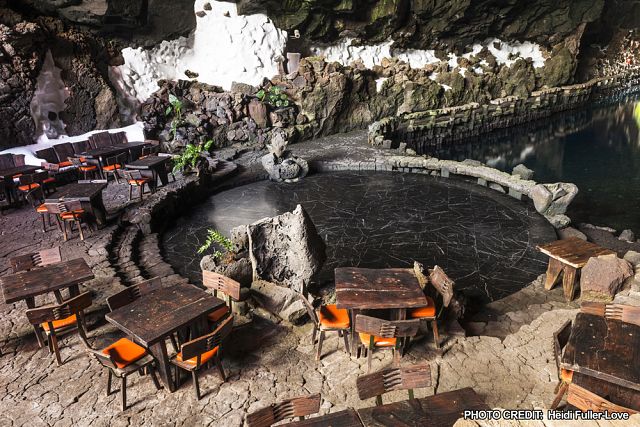 Drive a few miles east and you’ll reach the Unesco World Heritage city of Guadix where 2000 folk live underground. Drawn here by the magnet of rich mineral seams, the Romans originally created an important commercial centre on this site, but it was the Arabs who named it Guadix, from Guadh-Haix, meaning ‘River of Life’. Local company Competa Homes (www.competahomes.com) have several Guadix cave properties on their books. 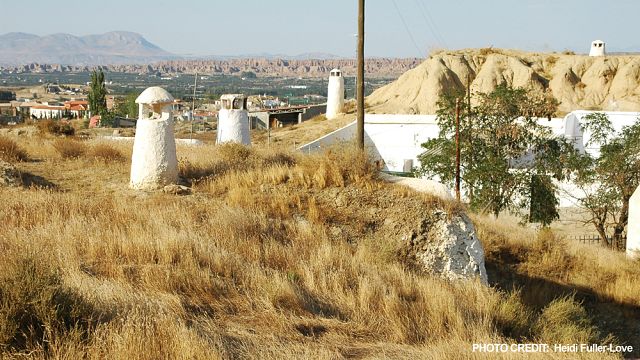 Popular with Britons after featuring on UK television, the high-flung hamlet of Galera is this rugged region’s prime troglodyte-property-buying hotspot. Close to Negratin lake, dozens of cave houses have been renovated over the past decade to create atypical holiday homes and original rented accommodation. Keelton properties (www.keelton.com) have hobbit homes available from €15,000.

4: Subterranean Base in Baza.

According to professionals, the asking price for a non-renovated cave house in the Baza area is fifty percent less than the asking price of a similar, above ground home.When both properties have been renovated, however, their resale value will be roughly the same. Looking for a grotto investment? Think Spain (www.thinkspain.com) have a ten room cave priced €22,000. 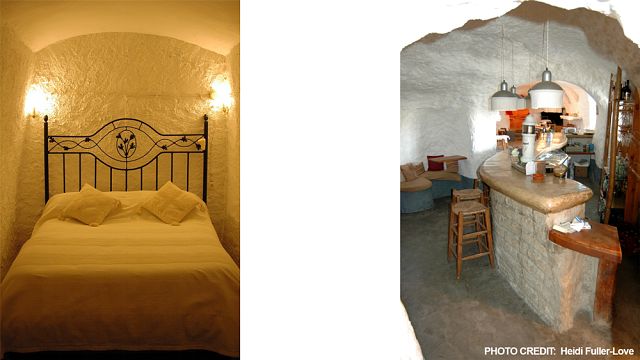 Pop over to Purullena, the cave village next door to Guadix and you’ll to find donkeys doddering back-and-forth along a busy thoroughfare lined with hand-crafted local earthenware for which this region is famous. Purullena pueblo also has a cave disco where you can let your hair down to the sounds of Herman’s Hermits. If you fancy a subterranean property in this pretty village check out the grottos on Kyero (www.kyero.com). 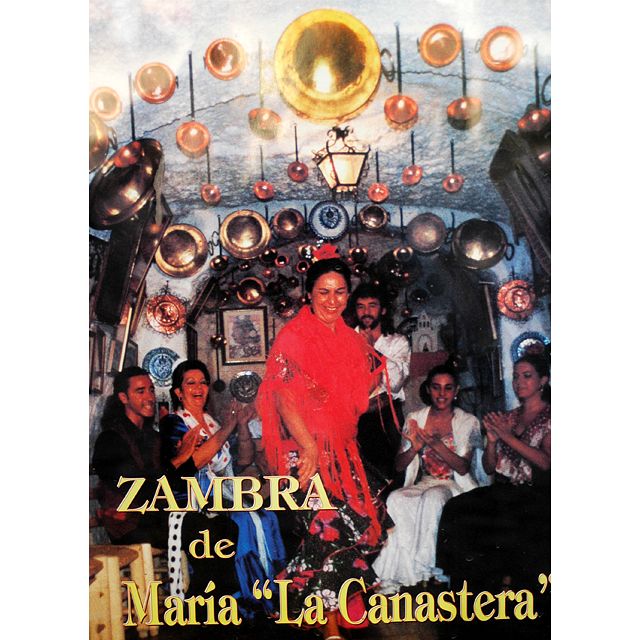 Frequently overlooked and rarely publicized, the troglodyte village of Bacor- Olivar in the north of Granada province straggles across a dromedary-hump hill surrounded by burnt meringue-folds of sierra foothills stretching to an olive-tree-lined horizon. If you’re tempted by this undiscovered gem take your pick of Think Spain’s (www.thinkspain.com)below ground properties.

A picturesque city high up in the Andalusian mountains, Huescar’s hillsides are a gruyere of cave houses surrounded by mountain peaks and lush scenery. Huescar also has a bizarre claim-to-fame: from 1809 to 1981 this mountain village was at war with Denmark after a tiff which started during the Napoleonic Wars. Cuevas Spain (www.cuevas-spain.com) has several properties in this pretty town, which was dubbed Ciudad de La Paz (City of Peace) when a peace treaty was finally signed in 1981. 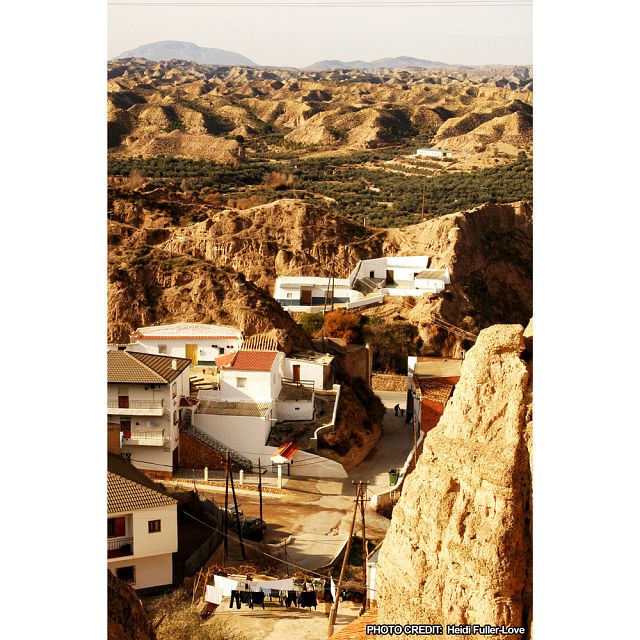 High on a hill overlooking the Torrevieja lagoon where the salt (Salinas) of the village’s name is farmed, San Miguel de Salinas in Alicante, has cave houses all over town. The main area where artists and craftspeople have their studios and shops is Primero de Mayo and there’s even a cave restaurant where you can relax after a long days property hunting. Think Spain (www.thinkspain.com) have several stunning subterranean properties for sale here.

When Spanish conquistadores arrived in the Canary Islands in 1402 they found the local population wearing animal skins and living in caves. Fast forward six centuries and many Canary Islanders still dwell in traditional cave homes with plenty of modern comforts, especially in the picturesque village of Guayadeque.
If you fancy joining the local cave dwellers, check out Real Estate Gran Canaria’s (www.realestategrancanaria.com) grotto offerings, from €115,000. 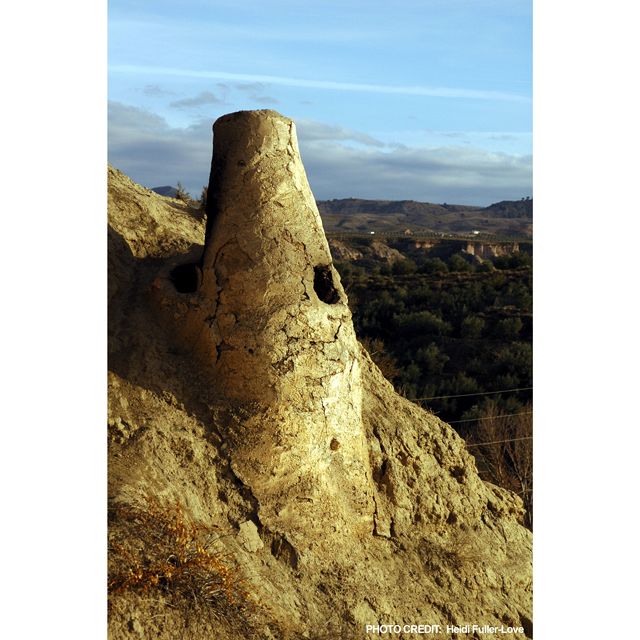 Famous Lanzarote artist César Manrique was so mad about caves that he built his home in one. Set amongst Lanzarote’s eerie volcanic landscapes, Manrique’s magnificent subterranean home can be visited (www.fcmanrique.org), as can Jameos del Agua (www.cactlanzarote.com) a cave complex containing a theatre, swimming pool and nightclub nearby. Make like Manrique and buy your own troglodyte dwelling via Kyero (www.kyero.com). Unlike low cost caves in other areas of Spain, however, you won’t see much change from €300,000.