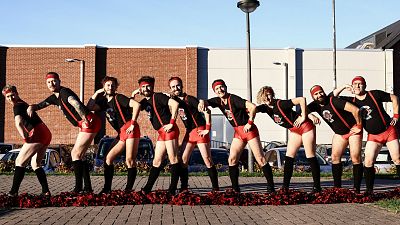 A female roller derby tournament held in Belgium had a halftime show most spectators won't forget: a cheerleading squad of a different kind.

But their goal is not just to make audiences laugh; they're after something much more meaningful.

Today, cheerleading is very much a female-dominated sport, and men or boys who express an interest in the activity can be looked upon as an oddity.

Scrimmage People are looking to end this stigma and show that cheerleading can be an inclusive activity for both men and women.

"You're not encouraged in your life as a man to wiggle, to dress sexy and not give a damn about your body.

Among one of the first groups of all-male cheerleaders in France, the Scrimmage People launched in 2016, and trained with the pioneers of the movement, the Austrian group 'Fearleaders', who also use cheerleading to subvert gender stereotypes and expose the ridiculousness of toxic masculine behaviour.

"The message behind the cheerleading group is that we're fighting against toxic masculinity," explains Thomas Pecuwe, one of the members of Scrimmage People.

"We're here to ask questions and show that everyone can do it, whether you're young, old, or have different physical conditions," he adds.

The group also hopes that it can shed light on how women cheerleaders are often hyper sexualised.

"Well, we're going to take that in our stride. So we'll also have very short shorts and tight T-shirts."

The group of eight male cheerleaders received a warm show of appreciation from the crowd in attentdance at the roller skating competition in Belgium.

"They shake up the codes, and at the same time as they make us laugh," said Raphaël Göbbels, a French chicken farmer.

"They offer us a little reflection, which is long overdue, which feels good, and which is not frequent enough."

Check out the video above to see the all-male cheerleading squad strutting their stuff!