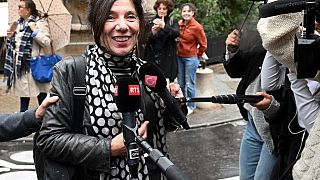 Giraud, 56, is the 13th woman to take home the prize in the 120 year history of the Goncourt, which is traditionally announced by the Goncourt academy at Paris’ Drouant restaurant. She is the first woman to win since Leila Slimani’s Chanson Douce (Lullaby) in 2016.

Vivre Vite describes the final days of Giraud’s husband, who was killed in a motorcycle accident in 1999, and how she coped in the aftermath of his death. It’s a novel that draws on her personal grief and incorporates autobiographical elements. It’s been lauded by critics for its “intimacy.”

After receiving the award, the author reflected on how intimacy translates to a wider audience.

“It seems to me that intimacy only has meaning if it resonates with the collective, with a society, with an era, with a history,” she told journalists in Paris. “I would like to think that (the Goncourt academy) also saw this dimension, which is much broader than a simple intimate life and a simple destiny, which if deprived of others does not have much meaning.”

Giraud had been critics’ second-favourite to win the award, after Swiss-Italian author Giuliano da Empoli for his novel Le Mage du Kremlin (The Kremlin’s Sorcerer), a fictionalised look at the corridors of power in Vladimir Putin’s Russia.

The Prix Goncourt comes with notoriety and increased book sales – most Goncourt winners go on to sell 350,000 to 400,000 copies. Only around 8,000 copies of Vivre Vite have sold since the book came out in August.

Goncourt prize winners are also given a cheque for 10 euros, which most authors prefer to frame instead of deposit.

Mbougar Sarr became the first sub-Saharan African author to take home the coveted prize for his novel about a young Senegalese writer living in Paris.