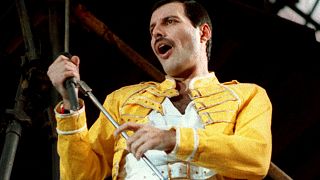 Queen have released a new song.

‘Face it Alone’ was recorded in the sessions for Queen’s 1989 album ‘The Miracle’. The band had forgotten about the recording but rediscovered it when they returned to the sessions as part of a reissue box-set for the album, set to be released 18 November.

“We did find a little gem from Freddie, that we'd kind of forgotten about,” drummer Roger Taylor said in June.

“It's wonderful, a real discovery. It's a very passionate piece.”

The band have released a lyric video for the song:

The recording sessions for ‘The Miracle’ in 1988 were beset by the tension of Mercury’s HIV diagnosis the year before.

The lyrics to ‘Face it Alone’ suggest Mercury’s mindframe following his positive diagnosis. The chorus begins with singular pride, “Your life is your own; You're in charge of yourself; Master of your home,” before devolving into lonely stoicism: “In the end, in the end; You have to face it alone.”

The song is not only a glimpse behind the curtain of Mercury’s mental state and is a rare example of newly released music by the band after his death in 1991.

At first, Queen guitarist Brian May didn’t think what was left of the recording was enough to turn into a new release.

“We looked at it many times and thought, 'Oh no, we can't really rescue that'. But in fact, we went in there again and our wonderful engineering team went, 'OK, we can do this and this.',” May told the BBC.

“It's like kind of stitching bits together... but it's beautiful, it's touching.”

Since Mercury’s death, Queen haven’t stopped releasing music, with the posthumous 1995 album ‘Made in Heaven’ as well as 28 compilations, live albums and other special editions.

The band have continued to tour with the material they made with Mercury, first with Paul Rodgers and then Adam Lambert, who has been on leading vocals since 2011.