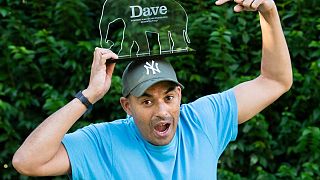 Following our coverage of the Edinburgh Fringe Festival, the world's largest arts festival, which includes wise advice from Fringe veterans and whether the Fringe becoming to exclusive, here are some jokes for you…

Every year, UK entertainment channel Dave recruits a panel of comedy critics, who attend hundreds of shows across festival, to seek out the best jokes of the Edinburgh Fringe festival.

The panel submit a shortlist anonymously – without the name of the comic involved – to a public vote of 2,000 Brits, who then decide which one-liner will be awarded Dave’s Funniest Joke of the Fringe prize.

This year (and for the first time since the pandemic), comedian Masai Graham got the most votes (52%) and has been crowned the winner, with the following pun:

“I tried to steal spaghetti from the shop, but the female guard saw me and I couldn’t get Pasta.”

So, absolute knee-slapper, or aren’t we suffering enough, make the zingers stop, for the love of gospel, make them stop?

We’ll let you be the judge and, just for some context, here are this year’s runner-ups, which include two entries from past winner Olaf Falafel and only two jokes were from female comedians:

This isn’t the first time Masai Graham has won the award, having previously picked up the prize in 2016 with his joke: “My dad suggested I register for a donor card, he’s a man after my own heart.”

Cherie Cunningham, Dave channel director, said: “What a pleasure to be back in Edinburgh! This is Dave’s first Joke of the Fringe in three years and the quality of submissions has been incredibly strong. It’s a fantastic top 10 full of newcomers and comedy veterans, and it’s a delight to crown Masai Graham as winner once more.”

Previous winners of the coveted Joke of the Fringe Award include Olaf Falafel, Tim Vine and Nick Helm. Here are the past zingers: