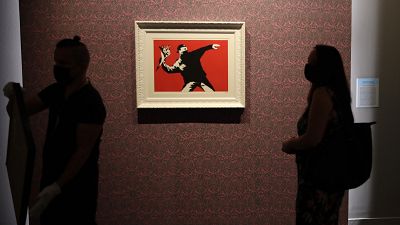 His artwork is famous all over the world but no one, apart from his friends and close associates, knows the true identity of one of the most acclaimed living street artists in the world, Banksy.

A new exhibition called Banksy: A Visual Protest has opened at Rome's Chiostro del Bramante, featuring over 100 of his best-loved satirical and politically engaging pieces, many made in the early stage of the artist's career.

All the works have come from private collections and range from pieces such as "Girl with Balloon" to "Love is in the Air"; from "Toxic Mary" to "Napalm"; from "HMV" to "Monkey Parliament"; from prints made for "Barely Legal" -- one of his most famous exhibits -- to projects for vinyl and CD covers.

Some are also being exhibited for the first time, but the theme running through all the chosen pieces is that of protest.

"Among contemporary artists, he is absolutely one of the strongest in this sense."

The exhibit includes works made with the stencil technique and printed on paper or canvas, together with a selection made with different approaches, such as oil, acrylic, or spray on canvas.

They often feature animals taking on a human form, or even replacing people, such as "Monkey Queen" and "Monkey Parliament", and explore themes of evolution, or a loss of humanity.

De Marco says Banksy's success is down to his extensive use of popular iconic images that make them immediately understandable and the perfect tool for conveying certain messages.

"Banksy's world is populated by everyday icons, like John Travolta in Pulp Fiction or the black blocs we've all seen on the news," she says.

"It's a contemporary world, a world we all know, but one that is decontextualised and that Banksy uses as a means of communication, a very strong one, not to be underestimated."

Thought to have been born in Bristol in the early 1970s and trained in the Bristol underground scene, where he collaborated with various artists and musicians, Banksy's artistic production began in the late 1990s.

From 2003 he began to populate numerous cities, from Bristol to London, New York, Jerusalem, and Venice with graffiti and other works.

Themes such as war, wealth and poverty, globalisation, consumerism, politics, and power inspire the artist who sells today his pieces for millions of euros in the most prestigious auctions and galleries.

The exhibition 'Banksy: A Visual Protest' runs until 11 April.