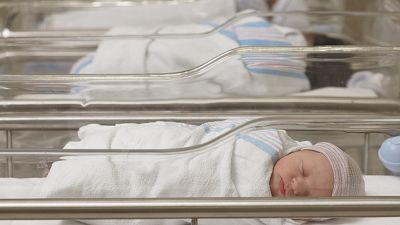 A Queens couple spent years trying to get pregnant and finally succeeded via in vitro fertilization in 2018. But when the woman gave birth to two boys in March 2019, they were stunned: The children did not share their Asian descent.

The couple reported they spent over $100,000 at CHA Fertility Center in California for attempts at IVF, according to a lawsuit filed last week. Red flags began to pop up throughout the pregnancy: A sonogram showed the woman was carrying twin boys, yet the couple had not used male embryos. When they contacted the clinic about it, doctors simply told them the sonogram was incorrect.

Following the birth, the couple "was shocked to see that the babies they were told were formed using both of their genetic material did not appear to be," the lawsuit stated. The babies were not related to either of their parents — or to each other. The couple relinquished custody of the children.

How does this happen?

Dov Fox, a professor of law at the University of San Diego, explained the regulatory gaps that lead to situations like these.

"Fertility centres — and there are almost 500 of them in the United States today — operate free of almost any regulation at all," Fox told NBC News. "There's no federal law, no state law, no enforced professional guideline that enforces requirements, that licenses these facilities in the way that they label or diagnose or handle sperm, eggs and embryos, that result in the creation of people."

States oversee medical licensing, education requirements and discipline for physician misconduct, while federal regulations require the reporting of certain data to the Centers for Disease Control and Prevention and the Food and Drug Administration, and regulate the use of drugs, devices and donor tissues within clinics.

There is also professional self-regulation among groups like the American Society for Reproductive Medicine (ASRM) and Society for Assisted Reproductive Technology (SART) to develop and practice ethical guidelines and programs for laboratory accreditation. Both organizations, who share a press contact, declined to comment on this story.

We really have no idea how often this sort of thing happens where sperm fertilizes the wrong egg or embryos are switched.

"In fertility medicine, it's very different than any other field, where we regulate very closely what's called 'never events,'" explained Fox. "These are major, avoidable mistakes. Things like blood transfusion on the wrong person, or a surgery on the wrong body part or the wrong patient. There, we require mandatory disclosure and we figure out what went wrong and how to fix it. We have nothing like that for what you might call 'never events' in reproductive technology."

It has not been determined how the mistake at the CHA Fertility Center was made, and it has not returned a request for comment from TODAY.

"We really have no idea how often this sort of thing happens where sperm fertilizes the wrong egg or embryos are switched," Fox said. "But cases that appear in courts and reports suggest that it happens a whole lot more often than you might think."

What sort of ramifications can this have for families?

For many, IVF is a time-consuming and expensive process. Carolyn Savage, 50, underwent IVF more than once. In March 2008, she gave birth to a daughter via IVF; in February 2009, she and her husband decided to use one of their five remaining frozen embryos. Ten days after it was transferred, she went into the clinic for a pregnancy test.

"They called me a few hours later to tell me it was positive, but that they had made a mistake," Savage said. "They had thawed and transferred the embryos of another family. So I knew right from the get-go that I was pregnant with somebody else's baby."

Savage described the experience as "pretty awful." She did give birth to the baby and give him to his biological parents, and later wrote a book about the experience.

Misplaced genetic material is not the only way that families can be let down by these clinics. Two tank failures at facilities in 2018 wiped out thousands of stored eggs and embryos, dashing dreams for many families.

How can potential parents protect themselves?

CHA Fertility Center claims to have "fulfilled the dreams of tens of thousands of aspiring parents." Its patients certainly didn't think this kind of mix up could happen there.

So what can you can do?

Savage suggested that couples ask for full transparency during any procedures and to request the embryology file. That's a file that contains notes and paperwork about the steps the embryo has taken, from freezing to thaw to fertilization.

Clinics also should universally make double-checking paperwork a part of their protocol. Do as much research on the clinic before you hand over that first payment. Ask if the clinic has made any mistakes in the past, Savage advised.

"Just ask to see everything," Savage said. "Had we done that, our mistake would have been avoided."