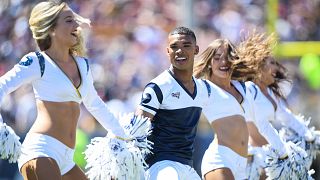 Two rookies will make history when they step onto the field at the Super Bowl this weekend — but they're not football players.

Quinton Peron and Napoleon Jinnies will become the first male cheerleaders ever to perform at the Super Bowl.

They already made history last year when they joined the Los Angeles Rams cheerleading team for the 2018/2019 season, becoming the first male cheerleaders in the NFL (along with a third man, Jesse Hernandez, who joined the New Orleans Saints' dance team, the Saintsations, this season).

Soon, Peron and Jinnies will continue to break new ground when they perform at the Mercedes-Benz Stadium in Atlanta for Super Bowl LIII.

"Ever since Sunday, I have woken up thinking that this is all a dream," Peron wrote on Twitter in January. "But it's not a dream ..... WE ARE GOING TO THE SUPERBOWL!!!!"

Both men are professional dancers from California. Jinnies is also a freelance makeup artist and beauty blogger.

Peron said on Twitter that it's "surreal" to be one of the first male cheerleaders to dance for a pro team. And when the Rams made it to the Super Bowl, he celebrated with Jinnies on Instagram.

Supportive comments from fans have been flooding in ever since they revealed they were headed for the Super Bowl.

"YES. This has been the only year that I started watching football because of you," one fan wrote on Peron's Instagram page.

"You two are our good luck charms!" another fan wrote.

Male cheerleaders are nothing new at the high school and collegiate level — and there have been male stuntmen at the Super Bowl in the past with the Baltimore Ravens — but Peron and Jinnies are blazing a new trail as the first male dancers on an NFL cheer squad.

And they may very well be inspiring the next generation of aspiring male cheerleaders to reach for their goals.

"So excited to read this! Congratulations to you!" one mother wrote to Jinnies on Instagram. "As a mom of a first-year boy cheerleader this gives me all the feels."

In the meantime, though, they are focused on the upcoming game.