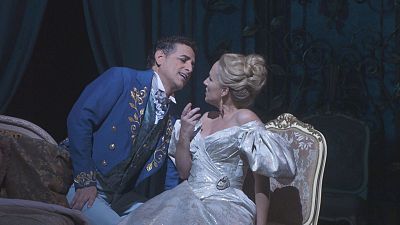 In this edition of Musica, we take a look at one of the most loved opera's in the world, Verdi's masterpiece "La Traviata", which is being staged at the Metropolitan Opera in New York.

"The master of depiction"

“Verdi is the master of depiction. He's depicting all these sentiments that we as roles are having: love, sadness, anger, it's there in the music.

"Sometimes you just sit down with this score and you are like, of course, ah yes. Thank you Verdi,“ says Tenor Juan Diego Flórez.

The opera tells the story of Violetta who, exhausted by her restless life as a courtesan, knows she will die soon but then finds her true love.

German soprano Diana Damrau says: "Violetta is a dream role, because she makes this huge journey.

"For the first time she really falls in love. In the beginning she tries to protect her heart but then she just lets go and in the end she is all heart."

On having to perform an amazing aria "Dei miei bollenti spiriti" Diego Flórez says: _"I'm saying how lucky I am to have her with me and she left everything.
_

"And then there is this Cabaletta that is fantastic also, and it has a high C. It's not written but I sing it in the end. It's very long high C."

"A moment of liberation that is ecstatic as well as the sad goodbye.“

Stage director Michael Mayer presents the opera as memories of Violetta. As she is dying she experiences flash backs of her one true love.

"There is this moment of sublime beauty,"

"At the very end of your life there is a moment of grace and a moment of liberation that is ecstatic as well as the sad goodbye,“ says Mayer.

Summing up the finale of Verdi's masterpiece's, Diana Damrau adds "It is incredibly dramatic and full of tension and then this pale light in the death scene which is reflected in the music, with Violetta's outbreak "Gran dio morir si giovine"... to die so young."