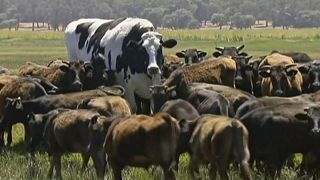 In the world of cows on the internet, Knickers is kind of a big deal.

The steer from western Australia has become a sensation after people saw photos of the 6-foot-4, 3,000-pound behemoth towering over mere mortal cattle at a farm near Perth.

Knickers is literally too big to fail. Owner Geoff Pearson said the 7-year-old Holstein Friesian has been spared the slaughterhouse because of his size.

"He's too big for the chain, he's out of spec, he'd be too heavy for the machines and he'd probably actually be hanging on the floor, so there would be contamination issues, and his cuts of meat would be too large," Pearson told The Guardian.

That means Knickers gets to live out his days on the 3,000-acre property "coaching" the normal-sized cattle about where to graze, and presumably eating everything until Australia is a barren continent. Anyone who has a beef with that can take it up with Knickers.

He actually still has some growing to do to catch the world's tallest cow, Bellino, which is 6-foot-7 and lives in Rome, according toGuinness World Records.

The gargantuan steer can also bask in the glow of the internet, where he has many admirers.

So how did Knickers become the size of a Hyundai? Is there some new type of bovine superfood or cattle steroids? Is he secretly eating other cows in the middle of the night?

"We don't know that ourselves," Pearson told The Guardian. "It's just a freaky thing."