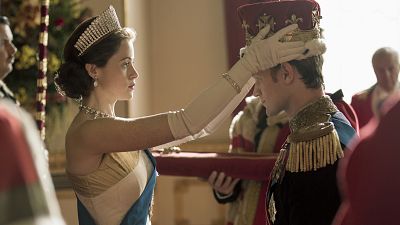 Suzanne Mackie, the creative director of the production company behind "The Crown," said that Smith received a larger paycheck due to his fame as former lead of the long-running sci-fi series "Doctor Who."

But "going forward, no one gets paid more than the Queen," Mackie said at a panel discussion at the INTV Conference in Jerusalem, according to Variety.

The revelation comes as Hollywood faces fierce criticism over pay inequities and struggles to find its footing in treating women fairly.

The most notable recent example of gender pay inequality emerged in January when news broke that Oscar-nominated actress Michelle Williams was paid significantly less than Mark Wahlberg for last-minute reshoots of the thriller "All the Money in the World."

Wahlberg earned an additional $1.5 million for the hasty reshoots, while Williams received only an $80 per diem — adding up to less than $1,000, according to USA Today.

The comments from "The Crown" producers also come in the wake of Frances McDormand's headline-grabbing Oscar acceptance speech, in which she called on actresses to push for inclusion riders, a contract clause that would require studios to hire more women and minorities.

The producers of "The Crown" did not provide specifics on Tuesday about Smith and Foy's salaries. Variety has previously reported that Emmy-nominated Foy made an estimated $40,000 per episode.

Netflix did not immediately return a request for comment.

Smith, 35, and Foy, 33, will not return for the third season of the series. The producers of the show plan to replace the actors playing the royals every two years over the course of an expected six-year run.

Foy, who stars in the upcoming horror film "Unsane," will be replaced on the series by acclaimed character actress Olivia Colman.