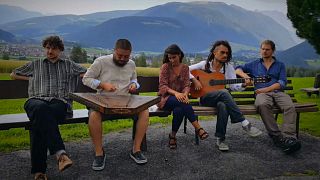 Their career may have begun on the streets of Istanbul, but now they are one of the most sought-after groups at music festivals across Europe. They are called, “Light in Babylon”

Mixing gypsy, classical and oriental sounds, the band sings in both Hebrew and Turkish. Marked by strong vocals, their songs speak of love and desire and the search for home.

Euronews caught up with the group recently at the Kribis Krabis Music Festival in Valdaora in northern Italy.

Describing their musical style, guitarist Julien Demarque said: “We are bringing many elements but we just try to mix it together so our music is a bit diverse……There is always gypsy music, classical music, Turkish music – Balkan music, as well, is similar and popular.”

The group already have three albums under their belt and are busy making their fourth.