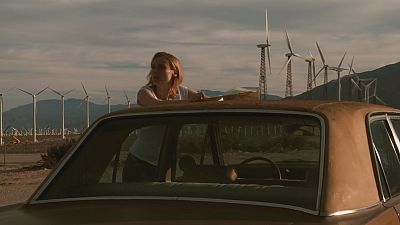 Sky tells the story about a French woman, Romy (played by Diane Kruger), who is on holiday in the United States with her abusive husband Richard.

The journey quickly turns into a settling of old scores. After an ultimate fight, Romy decides to break free and finds herself falling in love with another man.

The idea of starting over is one Kruger believes most people can relate to or fantasise about at some point in their lives.

“A lot of people sometimes find themselves in situations that they’re not happy in anymore or that they’re just idle,” says Kruger.

“They are too scared to leave that behind, take risks and the older you get the harder it is to leave things behind.

“So the movie is really about, you know, being open, allowing yourself to be open for love, for life, whatever you have not done yet in life.”

While Kruger has acted in many big budget movies such as Troy and Inglorious Basterds, she says making films such as Sky is what feeds her soul.

The movie was directed and co-written by her friend Fabienne Berthaud, a French filmmaker with whom Kruger has a long professional history.

“This is our third feature together and we started out together,” Kurger says.

“Our last feature, which was called Lily Sometimes, got an award at the Sundance Film Festival five years ago and we were at the party for the movie, you know, a little buzzed and we were sort of imagining, dreaming about what we could be doing next and so the idea of the movie was born then.

“We wanted to make a love story, we wanted to make a road movie and I think for most European directors, making a movie in the US is sort of the ultimate dream, so she came to Los Angeles where I live and she took this trip.

“She rented a car and she drove through America and discovered an America that I think is not an obvious America to Europeans, you know?

“And so a lot of the characters you meet in the film are actually inspired by people she met along the way and then it took her, you know, four years to write the story.

“But I’ve sort of been at the origin of the film and we have this great work relationship and we’re friends so, I don’t write myself but I certainly, you know, help her develop the character and it’s a real collaboration.”

The film, a French-German co-production entirely shot in in the US charts Romy’s journey through America, of self-discovery and new beginnings.

Sky recently opened in the United States, is playing in France and will premiere in Germany in June.