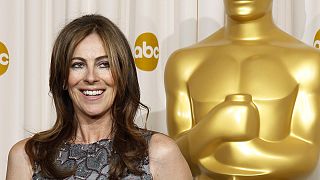 When Kathryn Bigelow won her Best Director Oscar for The Hurt Locker in 2010, it was hailed as a turning point for women in Hollywood. But depressingly – although perhaps not surprisingly – there has been no such turning point, no breakthrough; no women directors were even nominated for an Oscar this year.

The annual Celluloid Ceiling report showed that women comprised just six per cent of all directors working on the top 250 US films of 2013. This figure is actually worse than in 2012 and worse even than 1998, when nine per cent of the biggest films were helmed by women. The report covers other aspects of behind-the-scenes work by women in the film industry – writing, executive producing, producing, editing and cinematography. In all sectors women lag behind.

Who and what has been nominated for this year’s Oscars?

Author Dr Martha Lauzen, executive director of the Center for the Study of Women in Television at San Diego State University said: “The film industry is in a state of gender inertia. There is no evidence to suggest that women’s employment has improved in key behind-the-scenes roles over the last 16 years.”

Many people saw Bigelow’s 2010 Oscar as just the beginning for female directors.

But four years on little, if anything, has changed. In 2011 the number of female directors who were nominated for an Oscar: zero. In 2012: zero. In 2013: zero. Even Kathryn Bigelow’s controversial Osama bin Laden thriller Zero Dark Thirty apparently didn’t warrant a directing nomination in 2013 although the film itself won five nods, including Best Picture.

This year again, the number of women directors nominated for an Oscar was zero.

So why is this number so low? Is there a shortage of women directors?

Not at all, says Oscar-nominated director Lexi Alexander, who headed Green Street Hooligans in 2005 and Lifted in 2010, among others. “There is no lack of female directors. But there is a huge lack of people willing to give female directors opportunities. I swear, if anyone near me even so much as whispers the sentence ‘women probably don’t want to direct’ my fist will fly as a reflex action.”

Women have not directed any of this year’s box office biggies, with the exception of Jennifer Lee and Chris Buck’s Disney animation Frozen.

Dr Lauzen says there is no simple answer to the question ‘why?’. “The film industry does not exist in a vacuum. It is part of our larger culture. If individuals in that culture hold stereotypical beliefs about women’s talents and abilities, individuals working in the film industry will as well.”

She adds: “It is my perception that many of the powerful individuals in the industry don’t view the lack of behind-the-scenes gender diversity as a significant problem and if members of a group don’t consider something a problem they will fail to recognise the need for a solution.

“And I frequently hear women aren’t hired as they’re viewed as ‘riskier’ hires and that as a business the film industry tries to avoid risk. However the film studios take risks all the time. I think the actual reason that women are viewed as riskier hires is because they’re not men.”

Lexi Alexander says the problem has been seriously acknowledged for a good 35 years and numerous promises have been made to fix the imbalance. But she says: “Can we all just be real for a second here? Ask yourself this: If diversity hiring were a sincere core value in Hollywood’s studios, do you honestly believe they’d fail?”

But amid the gloom, there was a brighter note earlier this month when New Zealand director Jane Campion (and the only female film-maker ever to win the Palme d’Or) was invited to head the Cannes Film Festival/ jury. Campion’s appointment is being seen as an effort by organisers at an event which has received criticism in the past for its failure to honour female film-makers.