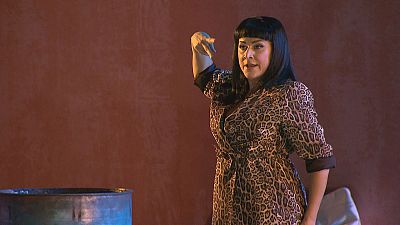 There was a very modern setting in Salzburg for the production of Handel’s opera, Julius Caesar in Egypt.

The power struggle between Cleopatra and Ptolemy, the vengeance of the wife and son of the defeated King Pompey, and the love story between Caesar and Cleopatra have been transposed into contemporary Egypt.

“The Cleopatra I love is the woman of a thousand faces, that’s probably the mystery of Cleopatra,” she told euronews.

“To begin with, Handel’s Cleopatra is a pretty stiff, severe, authoritarian woman; always fighting with her brother Ptolemy. She’s a woman hungry for power.

“Then she discovers love, but with this love for Caesar everything changes, this once strong woman becomes fragile. Because of this love and the trials and tribulations that come from it, Cleopatra is a marvellous woman.

“Julius Caesar is a difficult opera that lasts four hours. We have an exceptional cast – Philippe Jarrousky singing Sesto is a fabulous counter-tenor with a truly splendid voice. Then in the title role there’s Andrea Scholl, with all his experience of the baroque repertoire he has a very beautiful voice. And with Anne Sofie von Otter we really have a prestigious cast.”

Cecilia Bartoli had another challenge in Salzburg too, beyond Cleopatra. She took on the role of the Whitsun Festival’s artistic director. Her three year term began with Handel’s opera Cleopatra, but included concerts on the theme of this mythical queen by other composers including Massenet, Berlioz, Brahms, Schumann.

“It’s a very great privilege to direct this festival. In the past, directors have all been great conductors,” she went on. “Muti was the last one, and before him other great conductors, the first of which was Karajan. It’s true, it’s a challenge for a woman.

“Everything comes from the fact that I have always sought to bring interesting musical projects, with themes that are interesting too.

“Patrice Caurier and Moshé Leiser are directors I’ve already worked with – we collaborated on productions in Zurich and Covent Garden in London – for me they are incredible artists with a real love for music. All the ideas clearly come from the libretto, but they really let themselves be carried by the music, by the ideas in the music, and that is very, very rare.”