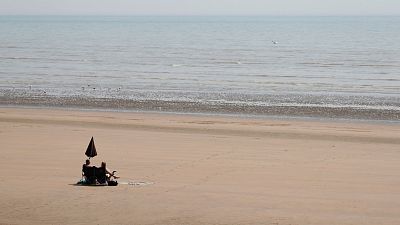 The UK is expecting a heatwave this weekend and it has many of us flocking to the beach.

Friday saw peak temperatures of up to 34C - the hottest day of the year in the UK for the third day in a row. While temperatures in some areas are set to drop in the coming days, much of the country is expected to see a warm weekend.

Travel search engine Kayak says it has seen inquiries about hotels on Britain's coast soar this week as people look to make the most of the sun. The top five most searched destinations include Whitby in England, Oban in Scotland and Llandudno in Wales.

With ever-popular beachy spots like Blackpool and Brighton not on the list, it seems like Brits are looking to explore further afield this year. But not everyone can afford to take a weekend away at such short notice.

If you are looking for a day trip instead, here is a selection of beaches within easy reach of some of the UK’s major cities.

This stretch of sand is around two hours from London, making it perfect for a day trip from the capital. It’s unusually soft underfoot for this region of the UK - where most of the coast is covered with shingles and pebbles.

The beach and surrounding area are a breath of fresh air from the busy city with the only dune system in East Sussex. A large section of this unique dune is a Site of Special Scientific Interest because of its important animal and plant communities.

The waters are usually calm and good for a swim on a warm day but be careful if you visit in the offseason as lifeguards are usually only present from May to October.

It’s worth the two hour drive from Manchester to reach this gem on the North Wales coast. Park up at Lligwy for the wide sands and beachside facilities. It has relatively safe waters and perfect conditions for sandcastles making it great for families looking to get out of the city.

If you don’t mind a short walk, then Traeth yr Ora is 1.6 km along the coast. This secret beach can only be reached by foot but you’ll be rewarded with soft, golden sands.

This seaside town in North Somerset is less than an hour from Bristol. It has over 3km of flat sands with a promenade featuring independent shops, cafes and bars running alongside it.

If you are looking for the traditional British seaside experience, Weston-super-Mare also has a Victorian pier. There are rides, food stands and even a Museum of Memories where you’ll be transported back in time through nostalgic foods, toys and TV shows.

A small sandy beach enclosed by cliffs and sandy hills, King Edward’s Bay is sheltered and perfect for families. It's also just 20 minutes from the centre of Newcastle meaning you can even make it an afternoon trip if you don’t want to spend the whole day at the beach.

The cafes, shops and restaurants of Tynemouth are right around the corner too so you won’t have to go far to refuel when you are all done on the beach.

A seaside suburb of Edinburgh, Portobello is just a few kilometres from the centre of Edinburgh. Despite being so close to the city, it has over 3km of sand making it perfect for swimming and sunbathing.

The independent town of Portobello also has a bustling high street with shops, restaurants, cafes and even a Turkish bath if you fancy trying something a bit different.