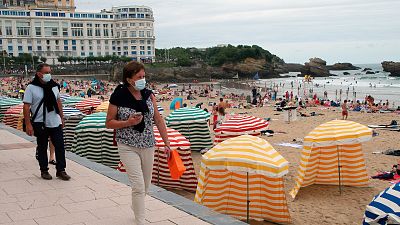 More than half of low income workers in Europe cannot afford to take a week's holiday away from home, according to research by the European Trade Union Confederation (ETUC).

About 7 million Italians are in this category - the highest number in Europe. They are followed by Spain (4.7 million), Germany (4.3 million), France (3.6 million) and Poland (3.1 million).

The ETUC said in a statement that while access to holidays has improved across Europe over the last decade, about 28% of European citizens still can't afford a one week holiday away from home.

But that rises to 59.5% when you just look at people whose income is below the 'at risk of poverty' threshold - set at 60% of the national median equivalised disposable income.

Some 35 million of the poorest in Europe can't afford a one week holiday.

Many of the people considered 'at risk of poverty' are unemployed or retired. But it also includes millions of low paid workers, particularly those earning the statutory minimum wage.

Furthermore, analysis of Eurostat data by the ETUC and the European Trade Union Institute (ETUI) found holiday inequality has grown in 16 member states over the last decade between those with income below 60% of median and those with income above that threshold.

The biggest divides in access to holidays between the two groups are found in Croatia, Greece, Bulgaria, Czechia, and France.

"The rise in holiday inequality shows how the benefits of economic growth in Europe over the last decade haven’t been shared fairly," ETUC Deputy General Secretary Esther Lynch said.

“The EU adequate minimum wages directive needs to be strengthened to ensure that wages are never so low that they leave workers living in poverty and collective bargaining is made a routine part of employment to ensure genuinely fair wages for all," she added.

The trade union association is currently working with members of the European Parliament to introduce a ‘threshold of decency’ into the legislation that would ensure statutory minimum wages can not be less than 60% of the median wage and 50% of the average wage of any member state. This would equate to a pay rise for over 24 million people.

The highest proportion of low-wage earners are in Latvia, Lithuania and Estonia, where they make up more than 20% of the workforce. Portugal, Finland and Sweden had the lowest levels among the 27 member states.

According to the European Commission, over a fifth - 21.9% - of the bloc's 450 million citizens were at risk of poverty or social exclusion in 2019.