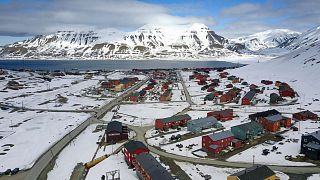 Travelling is thirsty work. After a tiring day of discovery and (hopefully) enlightenment, sometimes all you want is to rest your bones and kick back with a cold drink. And amazingly, even in some of the most remote locations on earth, you’ll still be able to get a beer.

As the world begins to re-open, here are a few of the world’s most socially distanced watering holes.

I mean, I’d need a drink too if I lived somewhere with year-round freezing temperatures and more than 280 days of snow a year. Located in the Ukrainian-owned Vernadsky Research Base on Galindez Island in Antarctica, the tiny Faraday bar has a surprisingly rustic feel to it thanks to the wooden beams built by its former British owners (in a commendable attempt to make it feel like a traditional old pub back in Blighty).

Sitting around 734 miles from the nearest port in South America, what it lacks in heat it makes up for in plentiful supplies of home-distilled vodka.

Speaking of heat, there are few better places to feel the searing burn of the sun than the Australian outback. And deep in the heart of that unforgiving rust-red landscape lies the Birdsville Hotel, a pub that’s so famously isolated it started to attract tourists for that very reason.

Almost 1,600 km from the Brisbane coast and serving weary travellers since 1884, it’s stood the test of time and the sizeable collection of bush hats and memorabilia behind the bar are testament to that.

Though these days you can catch a ferry or charter a helicopter to The Old Forge, some might say that would be the coward’s way out. If you truly want to earn your beer at this place, you’re going to have to hike there since there are no roads that directly lead to it.

Located in the village of Inverie on Scotland’s Knoydart peninsula and famous for being the remotest pub in mainland Britain, the 28 kilometre hike can take a couple of days and crosses a demanding Highlands mountain pass. Though - the reward of a cold beer and an epic tale of endurance probably makes it worth the trouble.

2,800 kilometres from land and lying in the ominous shadow of an active volcano, you’d imagine the residents of the tiny village of Edinburgh of the Seven Seas are in constant need of a drink. And at the sparsely decorated but functional Albatross bar, they find that refuge.

Intrepid travellers will need to put plenty of planning into a trip here too if they want to impress their friends. The boat trip to Tristan da Cunha takes around one week and only leaves 12 times per year.

From the inside, the Funken Lodge’s smart stylings and classy cocktails look like it could be in any cosmopolitan city. To look at where it is on a map, however, paints an entirely different picture. The world’s most northern cocktail and champagne bar, the Funken Lodge resides on the Arctic island of Svalbard – a place better known for its polar bears than any refreshing daiquiri or mojito.

Though not a typical part of the world to sip on a cocktail, nobody will complain about the stunning glacial panoramas on offer.

Lying nearly 5,000 kilometres northeast of New Zealand in the South Pacific Ocean and home to just 50 hardy souls, it’s amazing that anybody lives in the Pitcairn Islands.

Run by Pawl Warren AKA Pirate Paul, the Whale’s Tooth Inn in Adamstown is a makeshift pub specialising in tequila served in the hollow of a whale’s tooth. Unfortunately, if you want to sample some then you’ll have to take a 32 hour boat ride as there’s no airport.

Residing in a city of 7 million people, the O-Zone Bar in Hong Kong clearly isn’t in a remote location. However, at a gaudy altitude of 480 metres, it’s the world’s highest bar (the clue is in the name).

Floyd’s Pelican Bar looks like the kind of place that really shouldn’t exist. Essentially a shack on stilts a couple of kilometres off the shimmering crystalline waters of the Jamaican coast, it was the lifelong dream of Floyd Forbes to build a magical free-standing bar in the ocean and he did it.

Now something of a curious tourist attraction filled with trinkets and memorabilia, the boat ride there takes around 20 minutes (watch out for sea urchins if you go for a swim).

You can find Irish pubs almost anywhere these days however this must take the prize for being the most remote. At an altitude of 3,450 metres above sea level, The Irish Pub in Namche Bazaar, Nepal makes Hong Kong’s O-Zone Bar look relatively humble.

Offering intrepid climbers a final bit of Dutch courage before taking on Everest, The Irish Pub serves a range of draught beers and whiskeys. Reaching the pub is a two-day hike from Lukla airport so that freshly poured Guinness had better be worth it.