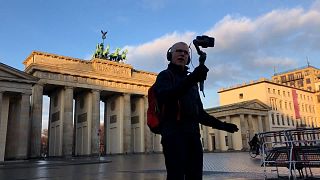 Travel and tour guide Jeremy Minsburg is offering virtual tours of Berlin as the second wave of coronavirus causes much of Europe to enter tighter lockdown restrictions this Christmas.

Minsburg began his virtual tours back in March during the first set of lockdowns. He's recently added city tours to his list, including a two-hour guided walk around the German capital.

From the Second World War to knocking down of the Berlin wall at the end of the Cold War, this city is steeped in history - and those taking the tour will have chance to ask questions along the way.

Germany's tourism industry reported a loss of €46.6 billion between March and August alone. And alongside many other cities around the world, it will be missing out on revenue from the Christmas season.

With restrictions set to be in place until January, virtual tours are as close as many of us will get to travelling for the time being.

Would you go on a virtual tour? Let us know - tag us on Twitter @euronewstravel.