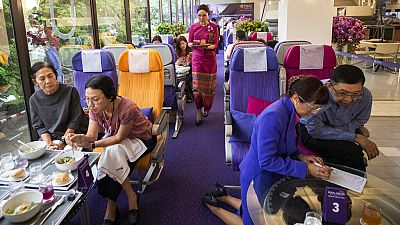 With millions of people around the world missing out on travelling this year due to the pandemic, airlines have been coming up with unique ways for travel-starved customers to pretend they are in the sky. And the idea seems to have taken off.

Dine on board a grounded passenger jet

Singapore Airlines is offering travel addicts the chance to relive the inflight experience, by dining and watching movies in a range of cabin classes on a grounded plane turned pop-up restaurant.

The Restaurant A380 @ Changi has been a sell-out success with people keen to get a pre-COVID flying feel.

"This is a really great opportunity to relive the fun experience on the plane and the meal experience of Singapore Airlines," says 28-year-old Calvin Teo, who bought a business class ticket.

Whilst the onboard meal and movie experience is considered the highlight, diners also get to tour the cockpit and various cabin classes in the double-decker A380, the world's largest passenger aircraft, as well as chat with cabin crew.

"The food is pretty amazing, it's better than the one they serve during the flight," said Zhou Tai Di, a 17-year-old student in economy class, who tucked into a soy sauce-glazed chicken with spicy fried eggplant and rice.

The tarmac meals have proved so popular the airline is also offering home deliveries of plane meals.

Onboard a retired commercial airplane in the coastal city of Pattaya in Thailand, coffee drinkers make themselves comfy on first-class-style seats, whilst some "passengers" take a tour of the cockpit of the Thai Airways jet.

"With this cafe, I can sit in first class and also mess around in the cockpit pretending to be the captain of the plane," says 26-year-old Thipsuda Faksaithong.

The attentive cabin crew are also serving meals such as spaghetti carbonara and Thai-style beef on plastic trays in its flight-themed restaurant, complete with airline seats at the headquarters of the national carrier in Bangkok.

The Royal Orchid Dining Experience opened in September, transforming what was the old staff canteen. Managers say it currently fits about 800 people a day.

There are three classes of food and service - First, Business and walk-in or Economy with different prices per head to match.

The airline is also offering time on its state-of-the-art flight simulators, so wannabe pilots can briefly live the dream.

For 20,000 baht flying fans can get a hands-on half-hour at the controls of an Airbus A380 simulator.

Pilots explain the bewildering banks of buttons and digital displays before taking to the virtual skies.

Customers choose where they virtually take off and land. Sessions include destinations such as Charles de Gaulle in Paris, though pilots say the most popular choice has been Tokyo.

The cockpit is an exact copy, pilots say, even down to the feel of the buttons.

And there's more to come from Thai Airways. Next up, sight-seeing flights around Thailand and a training course for would-be cabin crew.

The low-cost airliner has been grounded for months because of the coronavirus pandemic and is now offering 90-minute flights circling Hong Kong.

Passengers are seated apart to ensure social distancing. No food is provided and all magazines are taken away.

Several carriers, including those in Australia, Japan and Taiwan, have been offering short flights that start and end at the same airport to raise cash.

The plane used for the flight is "Emily," a Boeing 787 Dreamliner normally reserved for international journeys.