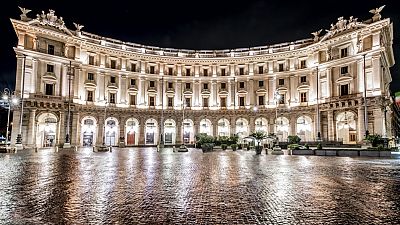 I sat enchanted by the tranquility of the Italian countryside as my train hurtled from Venice to Rome at 253km/h, heading towards a city known for having three millennia of history. Upon arrival, I clambered into the sidecar of a lime green, classic Vespa next to the driver and, with the Italian sunshine warming my face, sped off into the noisy traffic. Feeling as if I was in the 1950s film ‘Roman Holiday’, I could barely contain my excitement as we approached our destination, the Dedica Anthology’s Palazzo Naiadi 5 star spa and wellness hotel. Admittedly, I was probably slightly less elegant than Audrey Hepburn.

The nineteenth century hotel sits majestically in the heart of Rome. Curved in front of the Piazza della Repubblica’s monumental fountain, it faces the baths that Michelangelo converted into a church in the sixteenth century. As soon as I set foot inside, I could tell the lobby paid homage to the arts, richly decorated with cascading chandeliers of Venetian Murano glass. The hotel atmosphere was serene and I knew that I would be able to find some respite here during my busy trip to Rome.

By the time I got to my room, I was ready to sink into bed. Propped up by some pillows and admiring the opulent decor around me. My visit to the hotel’s famous Fusion Spa awaited me.

Improving wellbeing in the Fusion Spa

After half a day of travelling and with tired feet, a trip to the Fusion Spa was just what I needed. I found myself instantly washed over with a sense of calm and felt at ease in the hands of the expert spa therapists. The spa’s treatments are drawn from ancient Roman and Asian rituals and use essential oils, healing herbs and minerals. They respect the rituals of the past and work with only natural ingredients, using grape, rice and sesame oil as a base.

As I soon discovered, treatments are tailored to individuals’ needs here and the massage oil was chosen depending on my preferred scent. I had told the therapists that I liked a light, floral scent from the candles in my room and they translated this into a combination of ingredients which would form my massage oil. Evelina, my therapist, gradually released all the tension in my body with a much needed deep tissue massage.

I floated back to my room to discover a candlelit bath filled with rose petals and a bowl of regenerating magnesium salts, which of course matched the scents in my massage oil. Awaiting me when I left the cosiness of the bath, was an energising drink containing the ingredients that followed me from the massage room to the bathroom. As I sat and watched the Vespas zipping around the fountains from the window, I sipped the delicious drink and picked out the complementing flavours of cinnamon, green tea, mint, vanilla and lime.

This element of personalisation really defines the Dedica Anthology’s philosophy and made my experience at the hotel feel utterly catered to me. After a visit from the hair stylist and makeup artist, I was ready to watch Don Giovanni at the unmissable Teatro dell'Opera di Roma.

The Posh Terrace, midnight snacks and a detox breakfast

There are many details that contribute towards an enriched city break, but for me, memorable cuisine is high on the list of priorities. That evening, before we walked to the Teatro dell'Opera di Roma, I was guided by one of the welcoming hotel staff to the ‘Posh Terrace’, to which I responded with a chuckle. The Posh Terrace did indeed deliver in being posh. Taking in the autumnal sunset, as a backdrop to the panoramic views of the city, we sampled a range of Italian cheeses and the fresh catch of the day, topped off with a glass of Prosecco.

From the rooftop, we could look down onto Rome and spy the great monuments. It was the landscape garden, ‘Villa Borghese’ in the distance, that caught my attention mostly due to its luscious green expanse.

That night, we bore witness to the controversial version of the Don Giovanni opera, which certainly caused a stir amongst the Italians (much to everyone’s surprise, a clothed orgy was acted on stage). I was relieved to be back at the hotel, where we were greeted by an assortment of midnight sweets, surrounded by an atmospheric mist of dry ice. But the night didn’t end there. One of the chefs fashioned a tiramisu from scratch right in front of us, and I couldn’t help but dig in. The creamy and eggy flavours were complemented by both the tartness of the raspberry and the sweetness of the homemade macaroons. Satisfied was an understatement, after such a midnight feast.

Our final day in Rome concluded with a detoxing yoga session, from a spot where you could see the original Baths of Diocletian, and a detox breakfast. The generous morning meal delivered sweet, fresh drinks and the kitchen catered to everyone’s needs and preferences - meaning the array of food was a vegan’s delight.

I still think about the homemade local peach jam, it has made all other jams I’ve tried seem overwhelmingly inferior. The cleansing breakfast wrapped up my unforgettable trip to Italy, which was in itself a detox for the mind, body and soul.

The Dedica Anthology offers rooms at Palazzo Naiadi from €300/£267 a night based on two guests sharing a double room with breakfast.