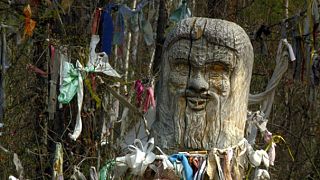 In South-Eastern Siberia there is an amazing wonder of nature – Lake Baikal. It is so vast and deep that locals call it the sea. But its water is pure and fresh: a fifth of the Earth’s freshwater is contained in this lake.

Baikal is known as the “Pearl of Siberia”. It is home to thousands of species of plants and animals, two thirds of which can be found nowhere else on the planet. Despite environmental threats, the lake has preserved its purity – due partly to the lack of large-scale tourism.

Mikhail Ovdin, the director of the Trans-Baikal National Park told euronews: “We have about 30,000 visitors a year, mostly those who prefer extreme kinds of tourism, because our roads and hotels infrastructure is quite poorly developed so far. Everyone finds something special on Lake Baikal, something personal. Some come to admire its unique nature, others come for the fishing, or to relax with the family, or for scientific purposes – everyone has a different goal.”

Before approaching the shoreline one has to stop at a forest sanctuary to appease the lake’s guardian spirits with an offering of fish, milk and wine.

The existence of good and evil spirits in the visible world is the core belief of shamanism, inherent to the native people of Buryatia. At their ritual gatherings, shamans go into an ecstatic trance to communicate with the spirits and convey guidance from the supernatural realm.

Head of Tengeri Buryat Shaman Association Bair Zyrendorzhiev said: “Shamanism is the traditional belief of our people, the Buryat people, that our ancestors held from time immemorial, and our children will, I think, hold after us. Baikal is one of the holiest places for Siberian shamanists. The very nature and the spirit of the lake are full of energy that links every person and all his descendants to the global force of the universe, the earth and the people.”

The sacred lake the size of Belgium completely freezes over in winter. Some ice lingers till the end of May, and the whole area remains cool throughout most of the year, providing perfect conditions for its diverse flora and fauna.

The coast of the lake, which lies along a tectonic fault, is scattered with hot mineral springs. They are famed for their healing powers and have attracted people for centuries.

The zen tranquillity of the place resonates in another main religion of Buryatia.

Tibetan Buddhism co-exists with Shamanism and Christianity everywhere in the republic and its capital Ulan-Ude.

Anatoliy Zhalsarayev, an expert in religious organisations with the Buryatia local authorities, said: “Of course, there is some conflict of interests between the leadership of the Shamanists and Buddhists. But the bulk of the people don’t really care – they come both to the Buddhists and Shamanists whenever they need guidance: what’s most important for them now is to live in mutual harmony.”

Ancient beliefs and traditions have influenced Buddhism after it spread here in the 17th century. Today the Buryatian Buddhists revere Baikal’s pristine untouched nature as a sacred place for all humanity.