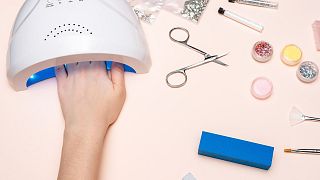 But its popularity could soon chip off.

A new study by scientists at the University of California in San Diego has found that radiation emitted by ultraviolet (UV) nail dryers - which are used to harden the gel - can damage cellular and genetic material, specifically by causing permanent mutations in human cells associated with a risk of cancer.

Countless scientific studies have shown evidence that how UV rays can cause skin damage and increase the risk of skin cancer.

But while the International Agency for Research on Cancer classifies broadband UVA (315-400 nm) as a Group 1 carcinogen, UVA can still be found in many commercial products that replicate the effects of the sun, such as tanning beds and UV nail dryers.

Tanning beds have been extensively studied and proven to have a causal relationship with skin cancer and indirect DNA damage. Yet there had not been any evaluation to show the effect of radiation emitted by UV nail polish dryers on human cells.

These wavelengths are responsible for curing and drying nail polish formulas, known as gels, thanks to a chemical process in which oligomers (the gel before it’s exposed to the UV light) harden into polymers (long-lasting gel nail polish).

Commonly, both nails and hands are irradiated with a UV nail dryer for up to 10 minutes per session, and regular users typically change their gel manicures every two weeks.

What did the study find?

Researchers from the University of San Diego performed in vitro irradiation of cells derived from humans and mice to UV light from nail dryers, to evaluate DNA damage and mutations of cells.

In the experiments, cells were irradiated one, two, or three times, with the duration of each exposure lasting between 0 and 20 minutes.

Scientists say the results of their study, published in the scientific journal Nature, provide a comprehensive profile of the DNA damage and cell mutation that occurs after irradiation with nail polish dryers.

They say further research in humans is needed before they can make definitive conclusions about cancer risks from exposure to UV nail polish dryers.