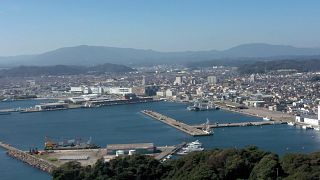 Eleven years after the Fukushima nuclear catastrophe, the region's inhabitants are preparing for a new step. Japan will soon start discharging treated water into the sea.

Water that touched the fuel has become radioactive. Filtered in a plant within the power plant, it's kept in tanks that will reach their maximum capacity in 2023.

The water's decontaminated of all radioactive substances except tritium, which is inseparable from water. The treated water will be mixed with seawater to be diluted. Then it will be discharged into the sea, a kilometre away via a tunnel.

"The characteristics of tritium that will be released at Fukushima are similar to those released by nuclear power plants around the world," says Kimoto Takahiro, deputy site superintendent at D&D Communication Center.

Tritium is a weakly dangerous radioactive element according to Jean-Christophe Gariel, deputy director of the Institute of Radiological Protection and Nuclear Safety.

"The characteristics of tritium that will be released at Fukushima are similar to those released by nuclear power plants around the world," he says.

Fukushima's reputation is at stake

It's information that's not escaped the attention of the fishermen of Fukushima, who are the first concerned by the quality of the seawater:

"There is a very small chance there'll be health impacts," says Nozaki Tetsu, chairman of the Fukushima Prefectural Federation of Fisheries Cooperative Associations. "But the big fear is bad publicity. We've had explanations from the government for more than 10 years and we haven't found any errors, so we appreciate their clarifications."

The reputation of products from Fukushima is a concern for the fishermen and the prefecture's inhabitants. Here Japanese people are very proud of their region, maybe because of the courage they've shown in recovering from the disaster.

In the port of the town of Onahama, 60 kilometres from the nuclear plant, restaurateur Watanabe Tatsuya cooks Fukushima products without fear. With his friend and market gardener Shiraishi Nagatoshi, he's actively involved in the reconstruction of the region.

"Where I think I was very lucky was meeting a trusted local chef right after the disaster," says Shiraishi. "He and his chef friends, and I with my network of farmers, were the driving force to create something together. Making people want to come back to Fukushima because they ate good food, I think that's the first step towards reconstruction."

"There were many false rumours from the beginning," says Tatsuya. "Friends of friends said there were deformed fish. Even though I told them that it wasn't the case, I had tests done and gradually started to serve more local products. If in April there are discharges of treated water, I will continue to use fish from Iwaki."

Products that are subject to strict controls - to standards stricter than those set by the World Health Organisation.

How we rose from Fukushima disaster with a renewables vision | View

10 years of decontamination - How the Japanese are handling Fukushima