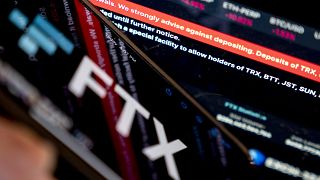 This photo illustration shows a message reading “We strongly advise against depositing” on the website of cryptocurrency FTX   -   Copyright  STEFANI REYNOLDS/AFP or licensors
By Pascale Davies  •  Updated: 22/11/2022

Cryptocurrencies are continuing to feel the shockwaves of the crumbling FTX empire with Bitcoin plunging to a 2-year low of $15,480 (€15,050) on Tuesday as other cryptos follow the downward trend.

It comes as the entire crypto market lost more than $1.4 trillion (€1.3 trillion) in value this year with multiple pressures, including the Terra Luna saga and now the fall of FTX, the world’s third-largest crypto exchange run by Sam Bankman-Fried.

FTX filed for bankruptcy this month after CoinDesk raised fears of a liquidity crisis. The cryptocurrency news website reported that the assets of Alameda, a crypto trading firm also run by Bankman-Fried, were mostly tied up in FTT, the coin of FTX.

Binance then said it signed a letter of intent to buy FTX but then reversed its decision, saying FTX’s issues were “beyond our control”.

As well as Bitcoin taking a big hit, the second-largest cryptocurrency Ethereum also shed more than 13 per cent in the last week to reach $1,089 (€1,059) on Tuesday.

But other crypto exchanges are also feeling the heat. Coinbase’s shares closed down more than 8 per cent on Monday, its lowest point since it come onto the market in April last year.

It has lost over a quarter of its value in the past four trading sessions.

He has called out the lack of experience among senior managers and how company funds were used to purchase real estate in the Bahamas where Bankman-Fried had moved FTX’s operations.