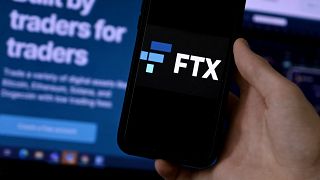 Cryptocurrencies across the board are taking a massive hit with Bitcoin reaching a yearly low after the third-largest crypto exchange FTX Trading is reportedly experiencing a liquidity crisis with regulators now swooping in.

Matters were made much worst after the largest crypto exchange Binance reversed its intent to buy its rival, the non-US unit of FTX, because, according to Binance CEO Changpeng Zhao, (better known as CZ), FTX is experiencing a "significant liquidity crunch".

"As a result of corporate due diligence, as well as the latest news reports regarding mishandled customer funds and alleged US agency investigations, we have decided that we will not pursue the potential acquisition of FTX.com," read a statement from Binance seen by Euronews Next.

It is probably a warning for the US and Europe to welcome crypto exchanges, for them to come into the light and not stay in the shadows.

"In the beginning, our hope was to be able to support FTX’s customers to provide liquidity, but the issues are beyond our control or ability to help".

CZ said he had signed a letter of intent to buy the company, which has sent the crypto world into a frenzy with prices dipping as it appeared the possible Binance purchase was a bailout. But crypto prices have nosedived even further with Bitcoin falling more than 15 per cent and Ether seeing a 30 per cent drop.

FTX investors have scurried to pull their money since the announcement. It has been reported that $6 billion (€6 billion) was pulled in just three days since the saga begun.

How did this happen and is this a crypto crisis? Euronews Next takes a look.

How did it start?

The CEO and founder of FTX, Sam Bankman-Fried is known by his initials SBF and as the "crypto kid," being just 30 years old.

Concerns then mounted about the exchange’s apparent insolvency, and following CZ’s announcement to acquire the Bahama-based exchange firm, there was a slowdown in withdrawals from FTX customers.

As for Bankman-Fried, his personal wealth plummeted almost 94 per cent in a single day to $991.5 million (€991.8 million) and he has now disappeared from Bloomberg’s Billionaires Index.

Is this the Lehman brother's crypto moment?

"What we are witnessing is this is not too big to fail. It's not a Lehman's brother moment," Pascal Gautheir, CEO of the crypto wallet Ledger told Euronews Next.

"The FTX story is a classic story of mismanagement and management not doing the right thing and it's nothing to do with cryptocurrencies themselves," he said, adding that FTX is a young company which is only four years old, like many crypto companies.

But while cryptos are now in freefall, it could be a reset moment for them once the "bad actors" are wiped out.

I see Bitcoin and Ethereum taking a big hit, which is very natural and actually a good thing. When you purge bad actors it sort of resets the industry.

"I would say to investors it is a time to be worried and to seek refuge from cryptos and take them off exchanges, Gauthier said.

"I see Bitcoin and Ethereum taking a big hit, which is very natural and actually a good thing. When you purge bad actors it sort of resets the industry. Once you reach the bottom it will pick up again".

Meanwhile, Bankman-Fried was hailed as somewhat of a crypto saviour for helping other companies that have faced difficulty during this so-called "crypto winter," most notably Voyager Digital which failed after it had a stake in Terra.

Bankman-Fried told investors that FTX is facing a shortfall of up to $8 billion (€8 billion) from withdrawal requests and needs emergency funding. It is unclear for the moment if any other crypto companies will step in, but they could.

He also deleted tweets on Tuesday indicating that FTX had enough assets to cover clients’ holdings.

What does this mean for regulation?

Lawmakers are likely paying close attention to what is happening with FTX.

The Securities Commission of the Bahamas is freezing assets of FTX Digital Markets, an FTX subsidiary.

Bloomberg also reported on Wednesday that FTX faces a regulatory probe by the US Securities and Exchange Commission and Commodity Futures Trading Commission is also looking into the company and its relationship with its sister partner Alameda Research and FTX US.

This could see a new wave of regulation on crypto exchanges, which Gauthier argues can only be a good thing that should have happened sooner.

"Regulation only usually happens after a big fall, for example, what we saw with the Lehman brothers. With FTX everything was in the shadows and you don't know about what is happening until it is too late," he said.

"It is probably a warning for the US and Europe to welcome crypto exchanges for them to come into the light and not stay in the shadows as that's where most crypto companies are".

Following the crash in crypto prices this year, alongside pressure on the mainstream markets due to global financial strain, crypto companies have felt renewed pressure with firms such as Celsius and Three Arrows Capital folding and Bitcoin dropping from $69,000 (€68,000) in 2021 to $20,000 (€19,000) this year and now $16,000.

However, asked about the volatility of the crypto market, CZ told Web Summit attendees last week that “everything is volatile, even the most lucrative tech stocks… but it depends on the perspective," adding that "if you take a five-to-10-year time frame, crypto is the best-performing asset".

The sentiment is also echoed by Gauthier.

"2022 is the year when bad actors are purged and 2023 will be when the good actors mean the market will grow again".

Is Binance to blame?

CZ said publicly last week that his company was selling its holdings in FTX’s native token FTT, which triggered the selloff.

But according to CNBC, CZ told Binance employees in a memo on Wednesday that he “did not master plan” the collapse of FTX.

He said FTX going down is "not good for anyone in the industry" and employees should not "view it as a win for us".