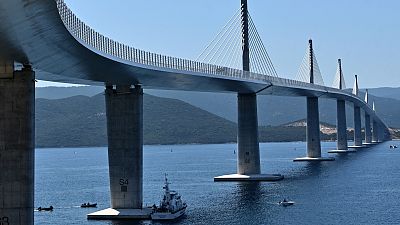 Newly-built Peljesac Bridge, a cable-stayed bridge in Dubrovnik-Neretva County spanning the sea channel between Komarna on the northern mainland and the peninsula of Peljesac.   -   Copyright  Elvis Barukcic/AFP   -
By Callum Tennant  •  Updated: 08/10/2022

In recent times, quips about building them have become a favourite phrase of many politicians. In the aftermath of Donald Trump’s presidency, the phrase “build bridges not walls” has also come into its own.

However, metaphors about bridges pale in comparison to the influence actual bridges can have.

For thousands of years, bridges have shaped our world, changed geopolitics, and left us with long-lasting repercussions.

London, like many cities, exists as it does today because of a bridge. In 43AD, the Romans built the first London Bridge, and the settlement of Londinium (which later became the capital we know today) rapidly grew around the crossing point.

The political importance of London Bridge was that it helped the Romans expand their reach and boosted their mobility in Britain.

Fast forward to today, and we see that the importance of bridges is ever more defined.

In recent months, for instance, Ukrainian forces have targeted a series of bridges controlled by Russian forces. The effect has been a significant reduction in Russia’s ability to re-supply troops in certain areas.

Here are three recently constructed bridges that are changing the geopolitical climate.

When it was finished earlier this year, the 1915 Çanakkale Bridge took the crown as the world’s longest suspension bridge.

The project has been seen as a political endeavour for Turkey and its president from the offset.

The year 1915 refers to an important Ottoman naval victory against the navies of Britain and France during the Gallipoli campaign in World War I, while the 2,023 m length of its main span correlates to the year of Turkey’s centenary.

Gallipoli was a disaster for the Allies but the struggle to defeat the western powers laid the foundations for a war of independence that would usher in the modern Turkish republic in 1923.

Like the decisive victory at Çanakkale over a century ago, the structure was designed to send a message.

However, the bridge is also important for geopolitical reasons as it is one of only six crossings in the Turkish Strait connecting Europe to Asia.

Of these, the 1915 Çanakkale Bridge is the only one located outside of Istanbul.

The crossing will reduce a previously slow ferry service to a six-minute drive. According to the economic impact analysis, the project will contribute €2.44 billion (€2.5 billion) to the domestic economy and €5.4 billion (€5.5 billion) to economic production.

Opening the bridge, President Recep Tayyip Erdoğan, who is fond of large infrastructure projects, said that "these projects have a large share in putting our country ahead in investment, workforce, and exports".

Perhaps the most impactful bridge built in recent years is the Pelješac Bridge in Croatia.

The bridge connects the north of Croatia with its southern enclave, which includes the popular tourist city of Dubrovnik.

Co-funded by the EU, the €525 million bridge, which opened in July, will cut travel times along the Adriatic coast by 37 minutes, according to the EU.

Before the construction of the bridge, people and goods travelling between the different parts of Croatia had to transit through Bosnia.

One of the fundamental principles of the EU single market is frictionless travel and trade, but as Bosnia is not a member of the EU, custom checks had to be conducted at both borders causing significant delays.

While this principle is normally talked about in the context of intercountry travel, the Pelješac Bridge now allows frictionless travel on an intra-country basis.

The structure connects the two parts of Croatia for the first time in decades; maybe that’s why the country’s prime minister Andrej Plenković said that the bridge was “not a luxury, but a necessity”.

While the EU funded 85 per cent of the project, it was a Chinese company that won the contract to build the bridge.

The Kazungula Bridge is located at a unique border.

Passing over the Zambezi River, the bridge connects the African countries of Botswana and Zambia at a point where the two countries' borders meet those of Zimbabwe and Namibia.

Opened in 2021, the link allows for a seamless crossing for vehicles travelling on the key transport corridor.

Prior to the construction of the 923-metre-long bridge, the crossing was facilitated by a more inefficient system of ferries and the border was known for its long delays.

The $260 million (€265 million) bridge will not only make it easier to transport goods and people by road but also by rail once the rail crossing becomes active.

Due to structural limitations, the bridge will have to be temporarily closed to road traffic when any trains are crossing, though this is still more efficient than crossing via boat.

The ability to quickly transport goods and people by rail will not only help make the transport corridor more environmentally friendly, but it’s also an important geopolitical and economic development.

A 2015 report by the African Development Bank (AfDB), which partly funded the project, found that a lack of railways in Africa limited growth and resulted in higher freight prices.

The completion of the bridge will make southern African exports which travel along the route more competitive.

The new bridge will also increase the flow of raw materials from an area which produces large amounts of the world’s iron.

The Kazungula Bridge will become a key transit route for these materials at a time when countries worldwide are trying to safeguard access to key raw materials.