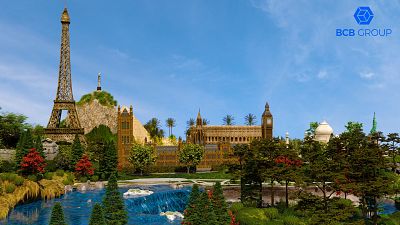 A virtual island in the metaverse housing all the world’s most visited landmarks could soon be welcoming visitors for as little as €2.

"VR City" as it is called would be homed in the metaverse and bring together landmarks, including Niagra Falls and the Great Wall of China.

The idea for "cyber tourism" is the latest thing being brought to the metaverse as its scope expands.

Virtual reality (VR) is already used by holiday destinations to drum up customers. It is hoped that by removing the traditional costs of travel and entry fees, the wonders of the world can be made available to the viewing public in the metaverse at a fraction of the price.

"The aim here is to overcome traditional barriers to interaction such as time and space," says Kamran Choudhary, metaverse expert at digital assets trading service BCB.

"This will allow the public to experience alternative travel experiences and services that may have been unavailable through traditional means".

Is virtual reality the future of tourism?

Big travel players like Delta Air Lines, Hilton Worldwide Holdings, and Qatar Airways have all branched into VR tourism, while experience oriented resorts like Disneyland provide VR attractions for all the family.

VR trips have also been used to drum up business with safaris in Kenya, snorkelling in the Maldives, and trips down the Baltic coast of Germany all offered up by customer-hungry and pandemic-hit travel industry members.

Could going to a metaverse location be the next step?

Development of such locations certainly offers up the chance for big profits, in theory.

"This VR City embodies a key yet underappreciated aspect of the Metaverse - that it’s ripe for building," said Choudary.

It is estimated by analysts at BCB that if the VR City were built, it would be worth nearly €3.5 trillion based on the exchange rate with the well-known blockchain ETH.

"Building sooner rather than later could prove to be a smart economic choice for many," said Choudary, who points out that building in the metaverse now, while costs are low, is a smart move for the future.

"This cyber tourist destination could be purchased by others who see its potential," he added.

"This land may then be repurposed for business activities within VR City with the hopes of turning it into an income generating asset".

Will tourists use the metaverse?

The idea of selling landmarks for virtual reality use was already tried by the city of Cannes earlier this year.

The coastal city on the French Riviera auctioned off iconic destinations like the Croisette and the Palais des Festivals as NFTs in June, which buyers would be able to set up as shops or entertainment venues in the metaverse.

The returns on the virtual city could be huge, with 70 million visitors a year projected by BCB based on current visitor numbers to actual landmarks.

Niagara Falls brings in 13 million tourists a year and the Great Wall of China attracts 10 million.

Meanwhile, the Taj Mahal, Eiffel Tower, and Colosseum, which also feature in the VR City, bring in between six-eight million each.

While visitors may save on costs by taking a trip to the VR City, it surely can’t be a patch on the real thing.

This sci-fi concept-sounding destination may lower traditional barriers to travel - but will anyone want to go?