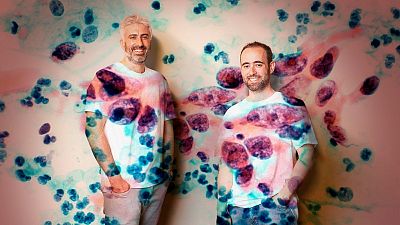 Over the past three years, 10 companies in what’s arguably one of the most competitive industries in the world have been sharing data in an unusual – and once unthinkable – way.

An EU-funded project using artificial intelligence (AI) to boost drug discovery has just wrapped up, and it has shown its potential to transform the pharmaceutical industry, according to Owkin, the French-American unicorn behind it.

The aim is to speed up the discovery and development of new treatments, which typically require hundreds of millions of euros in research and take over 10 years to reach the market.

Large pharma companies including GSK, AstraZeneca and Novartis collaborated on the programme, called MELLODDY, which allowed Owkin’s machine learning models to train on their confidential research without the drugmakers having to worry about this precious data ever leaving their own servers.

“Instead of gathering the data, we let the model travel from one pharma to the other one,” Mathieu Galtier, Owkin’s Chief Data Officer, told Euronews Next in an interview.

“It's a kind of symphony. That's why we liked the world melody; we orchestrate how every model is going to go learn a little bit on this pharma, then on this other one”.

And there was a lot to learn.

A ‘searchlight’ in drug discovery

The goal for Owkin was to harness all this data to make its machine learning tools smarter and able to better predict how a certain compound will react to or bind to certain proteins – and therefore which compound will be adequate for a certain drug or therapeutical target.

This is where AI has the potential to radically shake up the pharmaceutical industry and the way it discovers new treatments, says Galtier.

“In the past, we identified a target, saying this is the protein that we want to activate or inhibit. And then we would try all the different compounds in the world, and we'd do things randomly,” he said.

Owkin was founded in 2016 and last year it reached “unicorn” status – when a startup gets valued at more than $1 billion (€976 million) – following a €160 million investment from French drugmaker Sanofi.

Owkin developed its AI tools by dispatching them across medical and research centres, working with local servers to access the data on which it trains its algorithms.

Since Owkin does not gather the data on a central server, the MELLODDY platform uses blockchain technology, with a ledger distributed across all contributing pharma partners, to keep a record of its activities.

The MELLODDY project was funded by the Innovative Medicines Initiative (IMI), a partnership between the European Union and the European Federation of Pharmaceutical Industries and Associations (EFPIA).

The project’s leaders say not only did the initiative demonstrate that Big Pharma could cooperate, but it was also more effective when sharing data this way.

It is better to collaborate than to go alone, and that's the main message that we got from the whole project

The trial proved that the “collaborative” model used for the MELLODDY project was on average 4 per cent better than drugmakers’ standalone AI models at classifying molecules as pharmacologically or toxicologically active or not.

The data sharing also increased the model’s ability to make confident predictions when looking at new types of molecules – known as its “applicability domain” – by 10 per cent.

“It is better to collaborate than to go alone, and that's the main message that we got from the whole project,” Galtier said.

The pharmaceutical lobby EFPIA concurred, saying the pilot could convince drugmakers to collaborate and open up their data to boost drug discovery.

“MELLODDY demonstrated the feasibility of secure collaborative modelling without jeopardising intellectual property,” an EFPIA spokesperson told Euronews Next, adding that the project had “enabled each partner to get better predictive models for the majority of their discovery assays”.

While a 4 per cent increase in predictive power may not sound that impressive to a layperson, it’s an average based on data from tens of thousands of drug discovery experiments – and it could mask a much more significant boost for some of these experiments, said Galtier.

It was still very tricky to get pharma companies on board in the early stages of the project.

Not only did Owkin have to convince scientists to share their data – it had to assure the companies’ legal teams and security experts that the data would be safe.

That might have had an impact on the type of data they initially agreed to share, with some of it perhaps not being the most relevant or insightful.

“If you put yourself in the shoes of a pharma company... You will start with something which is safe, like the good old assays, the experiments they did 10 years ago,” Galtier said.

However, as the project progressed, greater volumes of data were shared, including from so-called “active experiments” where the drugmakers are currently doing research.

But Galtier doesn’t actually know anything about the underlying data they’ve provided. Neither do any of the other operators of the platform – that’s the whole premise on which it was built.

“I'm sure that if Owkin or if I had the rights to look at the data, the pharma would not have joined, they would have said no way,” Galtier said.

“We made sure of that. We had some academic partners walking and trying to attack the models, extract information... We made sure that it is not possible. That was one of the prerequisites of the pharma companies,” Galtier said.

Owkin says the successful rollout of MELLODDY has reassured Big Pharma on the possibility of sharing data in a safe way, and it’s now planning to create more specialised “channels,” or “consortia,” for drugmakers willing to share data using the same federated learning technology.

The data shared would go beyond drugs and small molecules to include protein design, antibodies and patient data – all potential troves of insight to help identify new treatments for cancer, diabetes or neurodegenerative diseases like Alzheimer’s.

Galtier said addressing drugmakers’ concerns about confidentiality had opened up a new space for collaboration, which he called “coo-petition”: not competition, not collaboration, but something in the middle.

“We show that it does work. It's the first step, but it's a very good first step”.