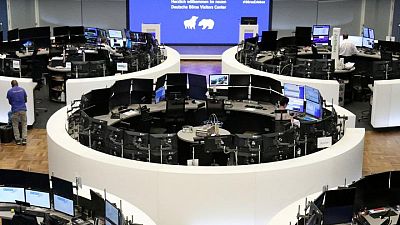 By Devik Jain and Susan Mathew

The continent-wide STOXX 600 index marked its worst session in over two weeks. Losses were largely broad-based and led by oil and gas stocks and miners. [MET/L] [O/R]

European gas prices jumped after Norwegian offshore workers began a strike on Tuesday in a move that hurt output and heightened worries about an energy shock.

“It comes at a highly fragile time geopolitically, given that the EU is facing the threat that Russia will turn off the taps abruptly, potential plunging vital industries into crisis,” said Susannah Streeter, senior investment and markets analyst at Hargreaves Lansdown.

Uniper shares slumped 9.5% as Germany prepared for the possibility of taking a stake in the country’s largest buyer of Russian gas, Handelsblatt reported.

Last week Uniper became the first German energy company to raise the alarm over scarce gas and soaring prices. The government has warned that utilities could face a Lehman Brothers style collapse due to soaring energy prices.

European Central Bank Vice President Luis de Guindos said on Monday the euro zone economy could suffer a recession if Russia cuts off gas supplies and industry had to adjust to a shortage of energy.

Tightening financial conditions are fuelling worries about a hit to economic growth and corporate profits. The STOXX 600 has shed almost 18% so far this year.

“We have been trimming European equity exposure for the past 4-5 weeks ago given the risk to GDP, currency and earnings. It all feeds into the idea of recession risks on the rise,” said Grace Peters, EMEA head of investment strategy at JPMorgan Private Bank.

Data showed business growth across the Eurozone slowed further last month, with forward looking indicators suggesting the region could slip into decline this quarter as the cost of living crisis keeps consumers wary.

SAS fell 10.2% after the Scandinavian airline filed for bankruptcy protection in the United States to help accelerate restructuring plans, warning strike action by pilots had impacted its financial position and liquidity.