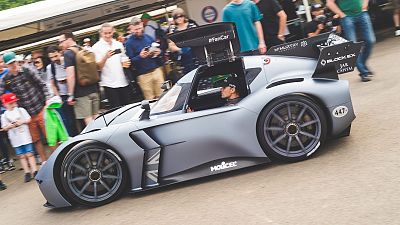 Electric vehicles (EVs) are having a moment.

As governments around the world clamp down on combustion engines to tackle global warming, EV take-up is soaring.

Global sales of electric cars doubled last year to a new record of 6.6 million, accounting for nearly 10 per cent of all car sales, according to the International Energy Agency.

Amid this growth, automakers are breaking new ground when it comes to speed and range.

Their latest concept models offer an exciting glimpse into possible vehicles of the future - from a Mercedes-Benz that can go more than 1,000 km on one charge to a “Batmobile” setting new records on the racetrack.

The ‘most efficient Mercedes ever built’

A key concern for EV drivers is so-called range anxiety, or the fear of running out of power while driving without being able to find a charging point in time.

This is one of the issues automaker Mercedes-Benz is hoping to tackle, through its Vision EQXX concept car.

The electric car broke its own range record last week, travelling 1,202 km on a single battery charge while navigating dense traffic conditions and summer temperatures of up to 30 degrees Celsius.

Billed as the “most efficient Mercedes ever built”, the car was driven from Stuttgart in Germany to Silverstone in the United Kingdom, with a total driving time of 14 hours and 30 minutes.

This compares to its initial record-breaking trip earlier this year, which saw it cover 1,008 km from Stuttgart to Cassis on the French Mediterranean coast.

The Vision EQXX boasts a 100 kWh battery pack, the same capacity as the battery for the Tesla Model S.

However, its latest journey of 1,200 km nearly doubles the Model S’ roughly 640 km per charge.

Unveiled at this year’s Goodwood Festival of Speed in the United Kingdom, the Ford Pro Electric SuperVan is, indeed, a van.

The vehicle is the first in Ford’s SuperVan line-up to be fully electric. But like the Mercedes-Benz Vision EQXX, the SuperVan is a concept vehicle, and probably won’t be going into production anytime soon.