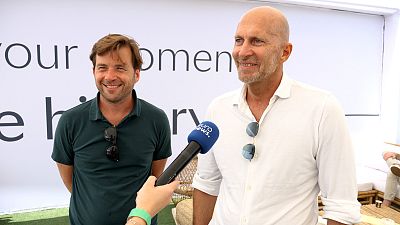 Launching a virtual beverage in the metaverse, brewing lighter tasting beer and using the power of humour in marketing campaigns are just some of the ways in which Heineken is working to connect with the tastes of younger consumers.

But for one of the biggest beer companies in the world, innovation runs much deeper than quirky slogans and adverts. The company that pledges to “Brew a Better World” says it is putting sustainability and action at the forefront of its business ventures.

"We have strong ambitions as a company. For instance, in a country like Brazil, we say we're brewed completely with green energy - thermal and electric," Bram Westenbrink, Global Head, Heineken Brand told Euronews Next at this year’s Cannes Lions Festival.

"Then we launch a campaign where we say we have a new ingredient, which is green energy. We believe sustainability is a new sign of premium in Brazil".

"Greener" - its sustainability and environmental programme - lays out how the company will achieve next zero in 2030; through things such as renewable energy as well as reaching other social goals. The company is, for instance, innovating across packaging, business processes and energy consumption to get there.

For brands, it's all about 'how can I be relevant in society?' 'How can I make the world a better place?'

Whilst young consumers are entertained by tech-driven and fun campaigns, ultimately they are more likely to make sustainable choices and expect companies to be delivering on this, a belief echoed by many leaders at this year’s event.

To stay engaged with younger generations - jaded by the inaction of politicians - influential companies must play a role in tackling social issues, Bruno Bertelli, CEO at Heineken’s Le Pub agency in Amsterdam, believes.

"For brands, it's all about 'how can I be relevant in society?' 'How can I make the world a better place?' They know that politics is not making a big difference so they hope brands can do something actively to change the world," he said.

Do not over communicate your green initiatives, however, as it may come across as ‘green washing’ or not being authentic, he added.

"They don’t want to see the communication. So sometimes it's more important to do something and not even communicate it because people search for it. When you are over communicating, it means you're trying to not be so transparent," Bertelli said.

For more on this story, watch an edited version of the full interview in the media player above