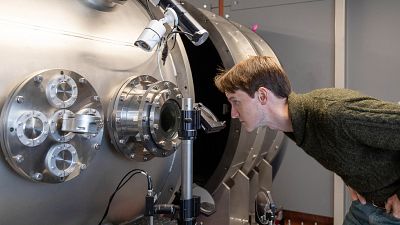 Hidden in an industrial park outside of Oxford in the UK, a group of scientists claim they are on the way to solving a global conundrum: how to create the energy needed to power the world cleanly and safely?

The answer, for First Light Fusion, is to harness the power of nuclear fusion, a means of generating energy which, unlike the nuclear fission process used in traditional power plants, does not create radioactive waste as a harmful by-product.

In nuclear fission, huge amounts of energy are created by splitting an atom. This energy then heats pools of water, the steam from which turns turbines to generate electricity.

The radioactive waste, however, needs to be safely cooled and stored far from humans, usually in tunnels deep underground.

The technology developed by First Light Fusion involves firing a projectile ignited by gunpowder down a giant gun where it eventually hits a target to release energy.

“Ahead of the projectile in this barrel is hydrogen. And the first projectile compresses that hydrogen into the central breach," said the company’s CEO and co-founder Dr. Nick Hawker.

When the first projectile reaches the centre of the gun, the hydrogen gets compressed and hits another much smaller projectile which speeds faster to its target.

On impact, a pulse of fusion energy is released, which the company said is absorbed by lithium flowing inside the chamber.

"This is the important bit of the technology,” said Dr. Hawker.

“It's not about the projectile, it's about what it hits and that's our target, and the target focus is the energy projectile into fusion fuel. And what you see here are all neutron detectors, which are measuring that fusion event happening."

Despite the fact that it has only produced a very small amount of energy, the company says it's a first step and important proof that fusion can be created more simply and cheaply.

Further validation is needed to prove whether the technology can be scaled up to create the volumes of energy required to meet demand on a national or even city-wide scale.

"The pilot plant we're aiming for, we want to keep it as simple and as straightforward as we can so it's about 150 megawatts electrical, and this is really important, it can be built with largely existing technology. No new materials, nothing unproven," said Dr. Hawker.

The UK Atomic Energy Authority has backed the results of First Light Fusion’s tests and on the whole believes the prospects are strong for fusion energy.

"Fusion promises to be a safe, low carbon and sustainable part of the world's future energy supply, and we support all advances in this scientific and engineering grand challenge,” Ian Chapman, chief executive of the agency, said.

“These results are another important step forward, and we are impressed that First Light have arranged independent analysis of their result."

Meet the men redesigning the battery to make it more sustainable

Why are scientists getting excited about nuclear fusion?