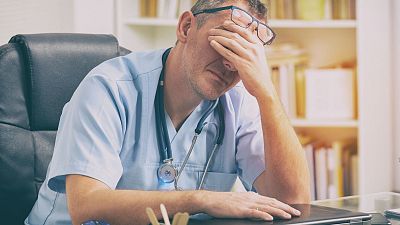 More than one in 10 healthcare workers in Australia reported thoughts of suicide or self-harm during the COVID-19 pandemic, according to new research published this week.

Within that group, less than half sought professional help.

“It’s only February, but this is the most important paper that I will publish this year,” Dr Marie Bismark, a public health physician and one of the authors of the study, posted on Twitter.

“Healthcare workers have given their all during the pandemic in Australia. We are not OK.

“I hope our research will help other healthcare workers who are struggling realise that they are not alone. We all deserve workplaces where we feel safe, supported, and valued,” she added.

What is causing such high levels of mental health difficulties?

Over 10.5 per cent of 7795 healthcare workers surveyed - some 819 people - reported thoughts of suicide or self-harm over a 2-week period during the second wave of the pandemic in Australia between August and October 2020.

Healthcare workers who had friends or family infected with COVID-19 had higher odds of having suicidal or self-harm thoughts, according to the research, as did people living alone, younger people and men.

It’s only February, but this is the most important paper that I will publish this year. Healthcare workers have given their all during the pandemic in Australia. We are not OK. https://t.co/aXXBqxT5HVpic.twitter.com/8IIAygBYeE

Almost 90 per cent of those who had suicidal or self-harm thoughts said they were suffering from burnout through emotional exhaustion.

Of the healthcare workers surveyed, 69 per cent of them who did not have those thoughts reported also feeling burn out through emotional exhaustion. Other forms of burnout, anxiety, PTSD and depression were also common for those with suicidal or self-harm thoughts.

“Our findings suggest that, across Australia, many thousands of healthcare workers are going to work each day with thoughts that their life is not worth living or with thoughts of harming themselves,” the peer-reviewed research paper noted.

“Yet, we have no clear way of connecting them with the care and support that they need”.

Important paper by @mbismark et al. Critical that we reflect on just what it means

I have been one of the "1 in 10". I've needed treatment, I've needed hospitalisation and I've had to fight to get back

Every "1" is a colleague

Healthcare workers face both practical and cultural barriers to seeking help. Long work hours, shift work, on-call commitments and limited availability of accessible and appropriate services make it more difficult even for those who do seek professional support.

Stigma and fear of the professional ramifications also prevent some healthcare workers from accessing support.

The Laura Hyde Foundation, a mental health charity in the UK for healthcare workers, carried out an online survey of 850 workers in the UK’s national health service between March and April 2021, which suggested staff may be missing out on support due to an ongoing perceived stigma attached to poor mental health.

Over half of respondents felt uncomfortable taking up employer-based mental health support services. The two main reasons were fear of letting down their colleagues and being struck off the medical register.

In Spain, similar research found that the prevalence of suicidal thoughts and behaviours among hospital workers during the first wave of the pandemic was 8.4 per cent.

What should be done to help healthcare workers?

“A pandemic of mental health problems for frontline workers who stepped up at a time of national emergency. We have to help them”.

Experts in Denmark, the UK, the US and South Africa wrote a joint paper on how healthcare workers should be properly supported going forward in the pandemic and beyond.

In addition, the paper called for healthcare leaders to lead by example and help remove the stigma associated with mental health issues among healthcare staff, and foster a work culture of transparency, trust, respect, openness, equality, empathy, and support.