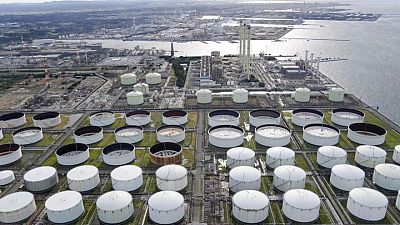 <div> <p>By Stephanie Kelly</p> <p><span class="caps">NEW</span> <span class="caps">YORK</span> -Oil prices rose on Wednesday, after government data showed U.S. crude and fuel inventories fell last week, offsetting concerns that rising coronavirus cases might reduce demand.</p> <p>Brent crude rose 29 cents to settle at $79.23 a barrel. U.S. West Texas Intermediate (<span class="caps">WTI</span>) crude rose 58 cents to settle at $76.56 a barrel.</p> <p>In the United States, the average number of daily confirmed coronavirus cases hit a record high of 258,312 over the last seven days, a Reuters tally on Wednesday found.</p> <p>Both oil futures contracts earlier traded at their highest in a month after U.S. government data showed lower oil inventories.</p> <p>Crude inventories fell by 3.6 million barrels in the last week to 420 million barrels, compared with analysts’ expectations in a Reuters poll for a 3.1 million-barrel drop.</p> <p>U.S. gasoline stocks fell by 1.5 million barrels over the same period to 222.66 million barrels, compared with analysts’ expectations in a Reuters poll for a 0.5 million-barrel rise.​</p> <p>Distillate stockpiles fell by 1.7 million barrels to 122.43 million barrels, versus expectations for a 0.2 million-barrel rise, the <span class="caps">EIA</span> data showed.</p> <p>“It’s draws across the board which are supportive,” said John Kilduff, partner at Again Capital <span class="caps">LLC</span> in New York. “We do continue to creep up on domestic production, which is positive.”</p> <p>Oil prices have been underpinned by Ecuador, Libya and Nigeria declaring forces majeures this month on part of their oil production because of maintenance issues and oilfield shutdowns.</p> <p>Russian Deputy Prime Minister Alexander Novak said that the <span class="caps">OPEC</span>+ group of producers has resisted calls from Washington to boost output because it wants to provide the market with clear guidance and not deviate from policy on gradual increases to productions. </p> <p>Investors are awaiting an <span class="caps">OPEC</span>+ meeting on Jan. 4, when the alliance will decide whether to proceed with a planned production increase of 400,000 barrels per day in February.</p> <p>At its last meeting <span class="caps">OPEC</span>+ stuck to its plans to boost output for January despite the spread of the Omicron variant.</p> </div>