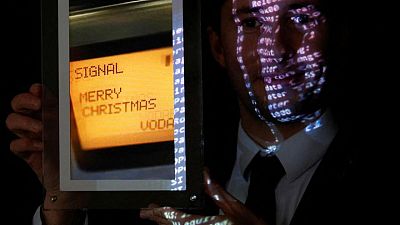 <div> <p><span class="caps">PARIS</span> – The first text message ever sent, reading “Merry Christmas,” was sold on Tuesday for 107,000 euros ($121,000) as a ‘Non-Fungible Token’ at a Paris auction house. </p> <p>The text, which was sent on Dec. 3, 1992, was put up for auction by the British telecoms company Vodafone.</p> <p>Vodafone engineer Neil Papworth sent the <span class="caps">SMS</span> from his computer to a manager in the United Kingdom, who received it on his 2-kg (4 lb) “Orbitel” telephone – similar to a desk phone but cordless and with a handle.</p> <p>“They were in the middle of end-of-year events so he sent him the message ‘Merry Christmas’,” said Maximilien Aguttes, head of development for the Aguttes Auction House. </p> <p>Non-Fungible Tokens, or <span class="caps">NFT</span>s, are a type of digital asset that has surged in popularity this year, with <span class="caps">NFT</span> artworks selling for millions of dollars. </p> <p>Traded since around 2017, these digital objects, which encompass images, video, music and text, exist on blockchain, a record of transactions kept on networked computers. Each <span class="caps">NFT</span> has a unique digital signature. </p> <p>The selling of intangible goods is not legal in France and so the auction house has packaged the text message in a digital frame, displaying the code and communication protocol, Aguttes said.</p> <p>The buyer will receive the replica of the original communication protocol that transmitted the <span class="caps">SMS</span> and proceeds will go to the United Nations Refugee Agency <span class="caps">UNHCR</span>.</p> <p>($1 = 0.8872 euros)</p> <p/> </div>