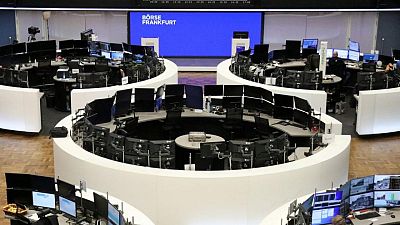 <div> <p>By Anisha Sircar and Shashank Nayar</p> <p> -European stocks ended lower on Monday in their worst session for three weeks amid a wider equities sell-off, with investors fretting over the spectre of tighter pandemic curbs hitting the global economy as cases of the Omicron coronavirus strain surge. </p> <p>The pan-European <span class="caps">STOXX</span> 600 dropped -1.4% to its lowest in two weeks. Oil companies , miners and auto stocks led declines, with all major sub-indexes ending lower. </p> <p>Travel stocks fell 1%, but were well above their intra-day lows touched earlier in the session, as some traders believed that positive vaccine-related headlines helped limit further losses. </p> <p>Moderna Inc said that a booster dose of its <span class="caps">COVID</span>-19 vaccine appeared to be protective against the fast-spreading Omicron variant in laboratory testing.</p> <p>“Headlines about booster shots working against the Omicron variant are providing little support, but if we are heading towards more movement restrictions and as long as virus cases continue to rise, we will see stock markets remain under pressure for awhile,” said Equiti Capital analyst David Madden.</p> <p>Britain may impose new restrictions to slow the spread of the Omicron variant after Christmas, media reported on Monday, a day after the Netherlands began a fourth lockdown and as other European nations consider putting a squeeze on Christmas.</p> <p>The <span class="caps">FTSE</span> 100 index dropped 1%, driven by weakness in commodity-linked shares – including a more than 5% drop in oil prices – as the spread of Omicron across Europe stoked demand worries. </p> <p>Madden added that reduced liquidity in the last weeks of December could also be leading to the exacerbated moves. </p> <p>Last week, the <span class="caps">STOXX</span> 600 rallied after the European Central Bank promised continued economic support and the U.S. Federal Reserve flagged a long-awaited end to its pandemic-era stimulus in March, while delivering an upbeat outlook.</p> <p>Among individual shares, argenx leaped 8.3% to the top of the benchmark <span class="caps">STOX</span> 600 after the Belgian group reached a regulatory milestone for its receptor blocker.</p> <p>The worst performer, however, was Novo Nordisk, which plunged 11.7% after the Danish drugmaker said it would not be able to meet demand for its new obesity drug due to U.S. supply issues.</p> <p><span class="caps">BNP</span> Paribas rose 0.5% after the French lender agreed to sell its U.S. unit, Bank of the West, to Canada’s <span class="caps">BMO</span> Financial Group for around $16.3 billion.</p> <p>Sweden’s BillerudKorsnas dropped 10.8% after saying it would buy U.S.-based coated paper producer Verso for around $825 million in cash as the pulp and paper manufacturer looks to expand into North America. </p> </div>