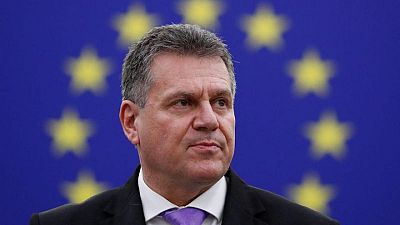 <div> <p><span class="caps">BRUSSELS</span> – European Commission Vice-President Maros Sefcovic urged Britain on Friday to reciprocate EU efforts to resolve post-Brexit trade arrangements for Northern Ireland, after the bloc proposed legal changes to ease the transport of medicines to the province.</p> <p>The two sides have been in intensive talks to resolve difficulties over trade between Great Britain and Northern Ireland, which shares a land border with European Union member the Republic of Ireland.</p> <p>“Today is a further demonstration of the EU’s unwavering commitment to stability and predictability for citizens and businesses in Northern Ireland. And I urge the UK Government to reciprocate our efforts,” Sefcovic told a news conference following a meeting with Britain’s Brexit minister David Frost.</p> <p/> </div>