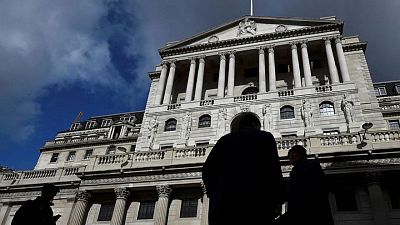 <div> <p><span class="caps">LONDON</span> – Investors sharply increased their bets that the Bank of England is about to raise interest rates for the first time since the <span class="caps">COVID</span>-19 pandemic, after inflation data came in far higher than forecast on Wednesday.</p> <p>Interest rate futures showed a 66% chance that the BoE will raise Bank Rate to 0.25% from 0.1% when it announces its December policy decision at 1200 <span class="caps">GMT</span> on Thursday, up from less than 50% before the November inflation numbers. </p> <p>Consumer price inflation targeted by the BoE surged to a 10-year high of 5.1% in November, hitting a level which the BoE only expected to see in April next year.</p> <p>“The BoE is more likely to hike after another inflation surprise today,” Nomura strategist Jordan Rochester wrote in a note to clients, arguing that the rise in inflation reflected the strength of longer-term price pressures. </p> <p>Two-year gilt yields, which are sensitive to short-term interest rate expectations, were on track for their biggest daily rise in just over a month, up more than 6 basis points on the day at 0.50%.</p> <p>Short sterling rate futures also priced in a faster pace of tightening next year.</p> <p>Before a BoE rate announcement last month, investors had priced in a near-100% chance of a rise that month, following comments from Governor Andrew Bailey which they interpreted as a signal that an increase in borrowing costs was imminent.</p> <p>But only two of the BoE’s nine policymakers voted for a rate rise, with Bailey and others preferring to wait for official data to confirm that the end of government’s job furlough scheme on Sept. 30 had not led to a big rise in unemployment.</p> <p>More recently, news of the Omicron variant prompted Michael Saunders – one of the two policymakers who voted for higher rates last month – to state that there “could be particular advantages in waiting” before raising rates.</p> <p>The BoE would be the first major central bank to raise rates since the start of the pandemic if it does so on Thursday.</p> <p>“Under usual circumstances, (inflation) would be consistent with an imminent rate rise,” <span class="caps">HSBC</span> economist Chris Hare said. “But the decision is not a straightforward one by any means”.</p> <p/> </div>