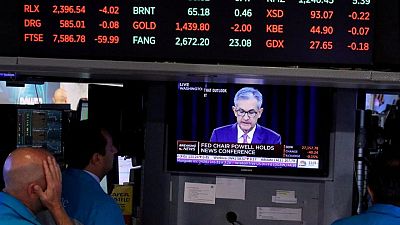 <div> <p>By Dhara Ranasinghe and Yoruk Bahceli</p> <p><span class="caps">LONDON</span> – Risks of a new <span class="caps">COVID</span> hit to economic activity are clobbering expectations for rate hikes next year from the world’s major central banks, a potential setback for the dollar and other currencies where wagers had been most aggressive.</p> <p>Money markets no longer fully price a 25-basis-point interest rate rise by the Federal Reserve by June 2022, nor are they positioned for a full 10-bps hike from the European Central Bank by the end of 2022, as they were just a few days ago. </p> <p>And the chances of the Bank of England raising rates next month are seen around 53%, from 75% on Thursday.</p> <p>Those shifts come after the detection of a new coronavirus variant in South Africa triggered stricter border controls from several governments, as scientists sought to determine if the mutation was vaccine-resistant.</p> <p>“While central bank commentary has been focused on upside risks to inflation, this (new <span class="caps">COVID</span> variant) highlights that there are significant downside risks and we are in a significant phase of uncertainty for the economy,” said Chris Scicluna, head of economic research at Daiwa.</p> <p/> <p>Rate hike bets slip as new <span class="caps">COVID</span> variant rattles markets: https://graphics.reuters.com/MARKETS-<span class="caps">RATES</span>/mopanleydva/chart.png</p> <p/> <p>In an echo of the panic that swept markets when <span class="caps">COVID</span> was spreading early last year, oil prices slid over 6% on Friday, travel industry shares notched up falls of 6% or more and two-year U.S. Treasury yields fell 12 bps in their biggest daily drop since March 2020.</p> <p>Currency traders had been favouring the U.S. dollar and others where rate hike prospects appeared strong, driven by higher inflation and stronger economies. </p> <p>Now a shake-out appears on the cards. </p> <p>The dollar index had hit 17-month highs after President Joe Biden said on Monday he would nominate Fed Chairman Jerome Powell to a second term. Then, minutes of the Fed’s Nov. 2-3 meeting showed more policymakers open to speeding up the tapering of asset purchases and raising rates.</p> <p>So with three 25 basis-point Fed increases factored in for 2022, speculators accumulated a $20 billion “long” position in the dollar, data from the U.S. <span class="caps">CFTC</span> showed. </p> <p>Positioning on yen, Swiss franc and euro meanwhile has been bearish, reflecting the view policy tightening is distant for those countries. </p> <p>If the new <span class="caps">COVID</span> variant has indeed disrupted Fed policy, “the dollar may be a bit more vulnerable than the euro because we are already talking of two-three rate hikes next year from the Fed,” Francesco Pesole, FX strategist at <span class="caps">ING</span> Bank said.</p> <p/> <p>Yen positions: https://fingfx.thomsonreuters.com/gfx/mkt/lgvdwndokpo/Pasted%20image%201637919367896.png</p> <p/> <p>The sharp yield drop on 2-year Treasury notes — a bond segment particularly sensitive to interest rate changes — pushed its yield premium over Germany 10 bps lower.</p> <p>Unsurprisingly, the yen and Swiss franc gained over 1% versus the dollar while the euro shot up 0.75% in one of its biggest daily jumps of this year.</p> <p>Some saw the moves as a reality check. </p> <p><span class="caps">UBS</span> Investment Bank chief economist Arend Kapteyn said while confidence in improving U.S. labour markets could fade if a new variant takes hold, it was still early days in terms of gauging the impact.</p> <p>But he added that “the market had gotten too far ahead of itself in terms of pricing a shortened taper window and multiple hikes next year”. </p> <p/> <p>US rate hikes: https://fingfx.thomsonreuters.com/gfx/mkt/movanlewdpa/USRP1.JPG</p> <p/> <p><span class="caps">COVID</span> IN A <span class="caps">TIME</span> OF <span class="caps">INFLATION</span></p> <p>The new variant may also complicate the task for central banks if it worsens the supply chain delays that are partly blamed for stoking inflation. </p> <p>Britain, where inflation has hit 10-year highs, had some 70 bps of policy-tightening priced by mid-2022, despite a lacklustre economic recovery.</p> <p>But on Friday, sterling fell 0.6% against the euro; alongside the Kiwi, Aussie and Canadian dollars, the pound was most vulnerable to easing rate expectations, <span class="caps">MUFG</span> analysts predict. </p> <p>In Europe, the new strain could strengthen the hand of doves on the <span class="caps">ECB</span>’s Governing Council.</p> <p>While the <span class="caps">ECB</span> is expected to wind down its 1.85 trillion euro ($2.08 trillion) pandemic emergency stimulus scheme, Mizuho strategist Peter McCallum now sees a greater chance the programme gets extended beyond the March deadline.</p> <p>That view resonated across southern European bond markets, the programme’s biggest beneficiaries. Italy’s 10-year borrowing costs slid under 1%, with the biggest daily fall in three weeks. </p> <p>“They (<span class="caps">ECB</span>) were saying that the European situation doesn’t change the <span class="caps">PEPP</span> outcome but if there is a new variant requiring new vaccines that surely does change the picture,” said McCallum.</p> <p/> </div>